Australia will run at Leopardstown 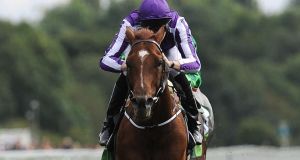 Australia has been confirmed as a definite starter in the €1 million QIPCO Irish Champion Stakes at Leopardstown on Saturday week.

The presence of Aidan O’Brien’s dual Derby winner will be one of the highlights on the opening day of the inaugural Irish champions weekend.

Aidan O’Brien’s star, so impressive at in the International Stakes at York, will be part of a strong Ballydoyle team at Irish champions weekend and the trainer said today: “Australia is in very good form and on course for the QIPCO Irish Champion Stakes at Leopardstown on Saturday week.”

Tapestry was another O’Brien winner at York and she will be Ballydoyle’s main representative in the Group One Coolmore Fastnet Rock Matron Stakes. Her trainer said: “Tapestry is in very good form and the Matron Stakes is the plan for her.”

He added: “The plan is to run Darwin in the Group Two Clipper Boomerang Mile at Leopardstown and we are aiming John F Kennedy at the Group Three Breeders’ Cup Juvenile Turf Trial Stakes.”

Leopardstown CEO Pat Keogh said: “The QIPCO Irish Champion Stakes always attracts a top quality field. We are very pleased with the runners both from Ireland and England.

“We are all looking forward to seeing Australia back in Leopardstown where he was the impressive winner of the Breeders’ Cup Juvenile Stakes last year. He is clearly an outstanding horse but he will have to be at his best as it takes a very special horse to win this race.”

O’Brien’s focus will be centred on the Curragh on Sunday, September 14th and again, he will be well represented on the card. He has 21 horses remaining in the Group One Goffs Vincent O’Brien National Stakes and of that race he said: “At the moment, Gleneagles and Highland Reel are up for consideration and we will possibly have one other runner in the race.”

Regarding his other runners at the Curragh, O’Brien said: “Leading Light has pleased us since winning the Ascot Gold Cup and he is on course for the Palmerstown House Estate Irish St Leger. Venus De Milo may take her chance in that race too, while the plan at present is to run Found in the Group One Moyglare Stud Stakes.”

Darley Irish Oaks winner Chicquita will have her first outing for Ballydoyle when she lines up in the Group Two Moyglare “Jewels” Blandford Stakes. “Chicquita has really pleased us since she arrived here and is ready to start off,” admitted O’Brien.