Annie Power likely to be supplemented for Champion Hurdle 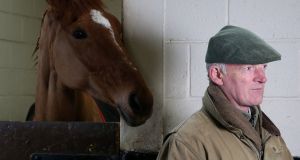 It is increasingly likely Annie Power will be supplemented for the Stan James Champion Hurdle at the Cheltenham Festival.

Having looked to hold all the aces a few weeks ago, Willie Mullins has been rocked by injuries to last year’s first and second Faugheen and Arctic Fire in recent weeks.

Annie Power was a short price for the OLBG Mares’ Hurdle, but is now set to switch to the highlight event on the first day, with Vroum Vroum Mag likely to step into her shoes in that race.

“We’ve got to supplement her (Annie Power), but Vroum Vroum Mag would look a possible for the Mares’ Hurdle and if that’s the case I would imagine Annie would go for the Champion,” said Mullins.

“Going back two years we felt Annie could be a Champion Hurdle horse, but we had Hurricane Fly in it and you’d have to think maybe this is the year she should run in it.

“I don’t think coming back to two miles will be any trouble to her. When you consider how many horses we could enter for a Champion Hurdle she’d be as fast as any of them.

“She’s good and keen at home and I’m happy with that as we need her to get all that work.

Assessing his other Champion Hurdle runners, Mullins said: “Sempre Medici definitely goes, Nichols Canyon — we’ll have another think about the World Hurdle for him, but I think connections-wise they are keen on the Champion.

“He disappointed last time, but he’s usually very good and very seldom disappoints. You have to forgive a horse a bad run every now and then. If he’s well, he’ll go there.

“Sempre Medici probably needs to improve 10lb, he has to step up but I have nothing else to run him in unless he carries top weight in the Coral Cup or something and I don’t have any interest in doing that.”