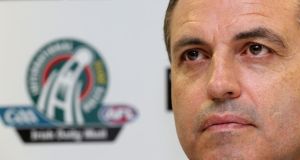 Ireland manager Paul Earley has finalised his 23-man panel for Saturday’s opening International Rules test with Australia, with Donegal’s Michael Murphy listed as team captain even though he’ll be playing a county final with his club Glenswilly less than 24 hours later.

Among the players to miss out on the game at Kingspan Breffni Park from the 29-man panel named last week are Kildare’s Johnny Doyle, Armagh’s Ciarán McKeever, and Daithí Waters of Wexford - although these may come back into contention for the second test in Croke Park on Saturday week.

“Reducing the numbers, as we are obliged to do for match day, was no easy task,” said Earley, “and those who have made the shortlist should and do consider it a real honour to represent their country ahead of the challenge of playing some of the best players in the AFL.

“Our training has really stepped up in the last few weeks and we are looking forward to Saturday’s first test and the support of what will no doubt be a passionate crowd in Cavan. I’d like to thank all of the players who made themselves available for training and I acknowledge their enthusiasm and commitment.”

All stand tickets for Saturday night’s game have sold out but terrace tickets are still available at €15 each.