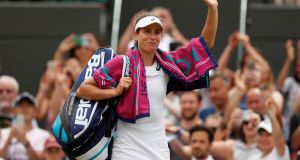 Johanna Konta waves after winning her fourth round match in the women’s singles at Wimbledon. Photo: Reuters

In the end it became a very British thing. Caroline Garcia lined up a forehand to carve Johanna Konta into having to win another point for the fourth round match.

The set up was good. The position on the court was perfect. But the French mind failed at the last moment. The ball hit the tape of the net. Konta dropped her racquet and the crowd in unison predictably moved from their giddy setting to highly excited partisan.

If Court One roof which is under construction had been complete, it would have been raised as the first female Brit since Jo Dury in 1984 made it to a Wimbledon quarterfinal.

A late developer at 26-years-old Konta, who came from Australia via Spain, wasn’t even in the top 100 three years ago but now threatens even bigger historical marks.

Fred Perry has even been called back into service after a decade of Tim Henman keeping his ghost alive and Murray finally letting it rest. Now Konta can share the hype with Murray about the possibility of becoming the first pair since Dorothy Round and, wait for it, Perry in 1934 to win in the same year.

Memorably for the wrong reasons Konta was the player reduced to tears after a foul-mouthed tirade from Ilie Nastase during a Davis Cup match in April. The Romania Federation Cup captain, was thrown off court during the singles match between Konta and Sorana Cirstea for abusive language.

Nastase entered the court at a change of ends and was heard shouting at the umpire: “What’s your f*****g problem?” He then called Anne Keothavong and Konta “f*****g b*****s” from the stands, before being escorted back to the locker room.

To that back drop Konta now meets Simona Halep in the next round, the Romanian number two seed, who was part of the Nastase team. And so it is that story which charges Tuesday’s quarterfinal between the pair. Neither wants to remember the episode in which Halep sounding less sympathetic and more “baby I don’t care”.

“I didn’t talk much about that subject with her,” said Halep after her 7-6 (3), 6-2 win over Victoria Azarenka. “But yeah, she knows how she felt there and I don’t want to comment anymore on that episode.”

Konta understandably wanted to focus more on Halep the tennis player, rather than encourage any suggestion of a vendetta against the Romanian Federation Cup team.

“Again they were not in my shoes. They were not being verbally threatened. I think it’s very difficult for them to understand my position in it.

“Again that’s many, many months ago. I’m looking forward to playing against Simona Halep, the top tennis player.”

Far from those grim exchanges, Konta pulled through on a day when the top seed Angelique Kerber fell to Garbine Muguruza in three sets 6-4, 4-6, 6-4. With a pregnant Serena Williams at home and fifth seed Caroline Wozniacki also falling to American Coco Vandeweghe, local hopes for Konta are not as misplaced as they sometimes can be.

With the German’s defeat goes Kerber’s number one ranking. She met an opponent who had recently set off the fire alarms in her house while cooking steak. Smoking hot form on another humid day in southwest London was the boom, boom line doing the rounds.

But it is Konta, where the energy is being directed after she and the seriously focussed Frenchwoman ripped the ball across the net in a sometimes tremulous match.

Few drop shots or changes of tempo entered the exchange, but it was Konta who held it together better than the younger player who was accused of taking coaching from her father after photographs appeared of him making hand signals from the stand – something that is not permitted at the championships.

“I mean you think I am looking at my dad for 20 seconds trying to understand what he is telling me,” said Garcia in astonishment. “There is nothing more, nothing less. Just like whatever,” she added dismissively.

With Murray already through, Britain is locked and loaded. You just wonder about that British thing, if Konta is really buying in.

Stephen Kenny vowing to do things his own way, an Ulster final like no other 08:14
Ireland boss Stephen Kenny: ‘I’ll do things my own way. Put it that way’ 06:00
Mickey Graham calls for some clarity from GAA on championship plans 08:24
Whole new ball game: Hats, scarves, facemasks - An Ulster final like no other 06:00
Damian Browne: To the ends of the Earth in search of the ‘savage warrior spirit’ 06:00
Here is your handy guide to sport on television this week