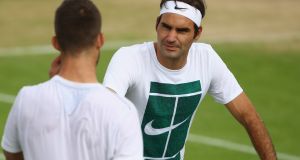 Roger Federer of Switzerland talks to Jiri Vesely of the Czech Republic during a practice session prior to the Wimbledon Lawn Tennis Championships at the All England Lawn Tennis and Croquet Club. Photo: Getty Images

It’s true that in London the mood and conversations relate more to Nice and Roy Hodgson than Andy Murray or Novak Djokovic.

As Wimbledon’s opening day prepares to go head to head with England’s Euro bid against Iceland tonight, Murray can put up his feet.

A talented footballer, the second seed drew interest from Rangers as a teenager. If he is moved to, the Scot can sit back to watch England. His challenge doesn’t begin until tomorrow, and he has the flinty Ivan Lendl again in his corner.

The boxing metaphors are not misplaced, with Lendl’s return adding aggression to the Murray camp.

He will need it if he is to go seven rounds of matches although the 22-year-old from Stockport, Liam Broady, is not expected to cause the first shock of the tournament.

Both Roger Federer, who this week reiterated that he was not going to follow Irish golfer Rory McIlroy and pull out of the Olympics in Rio, and Djokovic face nervous opening games on Centre Court on day one.

Djokovic, the defending champion, and seven-time winner Federer, begin quests of differing magnitudes. Both are on Centre Court with the Serb teeing up three Wimbledon titles in a row and his fourth overall, this year’s title accompanied by €2.46 million.

Having won in Melbourne and Paris, he also has a chance to become the first man since Rod Laver in 1969 to hold the first three legs of the calendar Grand Slam.

As is the custom, the defending champion begins play on the main show court at 1pm. He will be playing Britain’s James Ward.

There is no Nadal this year with the Spanish hopes bearing down on French Open winner and soccer mad Garbine Muguruza. The 22-year-old who was beaten by Serena Williams in last year’s final comes back a year older and as a newly crowned Grand Slam champion. That will count for something.

“For Spanish people we are crazy [about] football,” said Muguruza. “If you don’t follow football [in Spain] then you’re dead. You don’t have conversation.”

Her mood is buoyant. Out-hitting Serena Williams in the final of a slam has that effect. “I was so happy that finally this year I did better than Nadal at the French Open,” she added. “I was like ‘this is so weird.’”

Muguruza is sandwiched between Djokovic and Federer, who faces the Argentinian Guido Pella. The two have never met before. Federer, a father of two sets of twins and Murray, who became a father earlier this year for the first time have both spoken about travelling to Rio. “I have never reconsidered my decision,” said Federer. “I know I will play. For me the Olympics has always been a big deal. Regardless of where it was in the world, it was always going to be a priority for me.”

One new face that is worth a look is Californian 18-year-old Taylor Fritz, the youngest male player to get direct entry to the tournament.

Already anointed as the US’s next big name, he has only played half a season at the highest level but is ranked 63 and made the Memphis Open final this year.

The main thing is probably to see him in his round one match as he may not be around for that long with fourth seed Stan Wawrinka first up.