Williams lets racquet do the talking

The number one seed enjoyed a sedate opening victory at Wimbledon 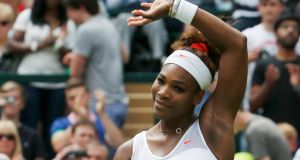 Serena Williams was able to turn her attention to on-court battles today as she won the first match of her Wimbledon defence with consummate ease against Mandy Minella.

A five-time champion at the All England Club, the American dominated from the outset and romped to a 6-1 6-3 victory in 57 minutes.

Williams may have wished she could have spent a little longer on Centre Court, if only to delay a post-match press conference it which it would be hard to avoid talk around her public spat with Maria Sharapova.

The feud dominated the build-up to the Championships and stems from an interview the American did with Rolling Stone magazine.

Having felt Williams’ negative comments about a fellow high-ranked player were about her, Sharapova returned fire by taking a swipe at the top seed’s love life.

Williams, in turn, said she believed clear-the-air talks between the pair at a party in London on Thursday had seen Sharapova accept her apology.

More questions about their fractious relationship seemed certain to follow this afternoon’s clash with Minella, which saw the 16-time grand slam champion extend her winning streak to 32 matches.

Despite having not played on the grass leading into Wimbledon, Williams looked at home from the start and broke her opponent in just the fourth game of the match.

Fresh from winning the French Open just a few weeks back, she did not drop a single point on her serve in a first set she wrapped up in a mere 19 minutes.

Williams looked set to continue the rout when play resumed, only for world number 92 Minella to make a brief comeback.

Playing just her seventh match on grass in a career spanning nearly 12 years, the Luxembourgian took the first game of the second set before then breaking her esteemed opponent.

Williams quickly rallied, though, and won the next four games. Minella briefly responded by winning her fourth service game of the set but Williams went on to win with ease, setting up a second-round clash with France’s Caroline Garcia.