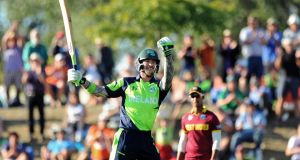 When the sports historians get to writing about this remarkable era for Irish cricket a footnote at the bottom of the scorecard from Monday’s remarkable four-wicket victory over West Indies in Nelson might not look like a place to start.

The fact that Ireland now own three of the five 300-plus run chases in World Cup history might look the obvious one, but if you really want to get to the heart of just how far this team has come over the last decade then look no further than John Mooney.

The all-rounder was fined 30 per cent of his match fee for a string of bad language after Max Sorensen spilled a catch off Darren Sammy out over the deep square leg boundary for six, as the game looked to be getting away from Ireland late in the West Indies innings.

Even when Sammy holed out to George Dockrell at deep mid-wicket off the next ball for 89, Mooney was still fuming, not helped by the lower leg cramps that saw him receive treatment throughout the innings. It was nothing personal against the fielder, more the collective exasperation of the team channelled through their spiritual leader after they had let their opponents out from a choke-hold, a full Nelson even. They should have all been fined, there are no individuals in this Ireland team.

Ireland’s spin bowlers had stifled the West Indies from the start, with an out-of-sorts Chris Gayle scratching around in a bid to find some form. Even still, the big Jamaican left-hander was dispatching the odd bad delivery to the boundary in his opening partnership with Dwayne Smith.

Smith holed out to Mooney off Kevin O’Brien for 18, while a brilliant piece of fielding and a direct hit from Andrew McBrine saw Darren Bravo run out three balls later.

It’s hard to fathom but Ireland were better off with Gayle at the crease but the batsman’s frustration was ended when he found the safe hands of Kevin O’Brien at cow corner to give left-arm spinner George Dockrell the first of three wickets in nine balls as the West Indies stumbled to 87 for five in the 24th over.

Their revival came in the shape of Sammy and Trinidadian Lendl Simmons, a second cousin of Ireland coach Phil. With the pitch getting whiter as it approached midday and with the shine long gone from the new balls, Ireland’s seamers were attacked viciously by the two big-hitting right-handers as they put on 154 runs from 127 deliveries to change the face of the innings.

Sammy’s departure for 89 off 67 deliveries saw Andre Russell arrive at the crease to launch his assault, while Simmons went on to claim his second ODI century before departing for 102, his innings spanning 84 deliveries, including nine fours and five sixes.

When the dust settled the Windies had made it to 304, not an outrageous score on a cracking wicket and a small ground, but the 124 runs conceded in the final 10 overs is the kind of thing that could have festered into something nasty in a lesser team.

Helped by a shocking first delivery from West Indies skipper Jason Holder that went past first slip Gayle off the gloves of wicket-keeper Denesh Ramdin for five wides, Ireland’s opening duo of skipper William Porterfield and Paul Stirling got their side off to the perfect start.

Short of a decent stand of late the pair put on 71 for the first wicket before Gayle had Porterfield caught behind by Ramdin.

Relishing a later start than usual Ed Joyce continued the form that saw him at the top of the County Championship scoring lists last summer as he yet again played the key knock in a World Cup game against the West Indies.

Four years ago his departure for 84 signalled the start of the end of Ireland’s chances in Mohali, but this time around the 36-year-old left-hander formed a crucial partnership of 106 with Stirling, before Sterling edged behind off Samuels for 92 to miss out on potential back-to-back World Cup tons after his knock against the Netherlands in Kolkata in 2011.

Joyce found another more than willing accomplice in fellow left-hander Niall O’Brien in a 96-run stand that was ended when Joyce holed out on the boundary with the score on 273 and Ireland just 32 runs from the line with 64 balls to come. Joyce’s 84 runs were not in vain this time around, and Ireland could even afford a late wobble before Niall O’Brien, unbeaten on 79, and Mooney secured the win with 25 balls to spare.

Ireland will now enjoy nine days off before facing fellow qualifiers United Arab Emirates at The Gabba in Brisbane on Wednesday February 25th.

A second win, against a side Ireland haven’t lost to since the dark days of the World Cup qualifier in Toronto in 2001, would leave them just one victory away from a quarter-final place with four Pool B games to go, including one against Zimbabwe in Hobart.

For Porterfield, the manner of the victory was key in setting the tone for the coming month.

“The way we went about chasing down those runs was great. It sets us up for the next three games. It’s a great position to be in. We firmly believe what we are capable of. We’ve just got to continue this throughout the tournament.”