Warlike habits reined in as Taylor dances into quarter-finals 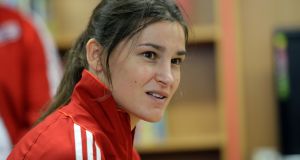 There was a point at the start of the fourth round in the Barys Arena in Astana, Kazakhstan, on Monday when Dayana Sanchez decided to throw the locker at Katie Taylor. The Argentinian came out swinging, sending big haymakers whizzing past Taylor’s nose. Sanchez was desperate. The fight was lost. She was looking for a Hail Mary to land. All Taylor had to do was dance and move.

But boxing habits die hard. The Olympic and world champion decided to go to war. For the opening minute, Taylor, who had had to pause for treatment to a bleeding nose in the previous round and who had the fight home and hosed, liked the idea of a battle.

So the two went at it, Taylor – as she often does – giving more than she got as coaches Zaur Antia and Eddie Bolger yelled from the corner to back off. Eventually, she did.

“Yeah, I went for it [in the fourth round], then . . . I heard Eddie and Zaur screaming in the corner, so I said to myself if I don’t move, they are going to kill me. So I had to stay clever and move,” Taylor said.

Prior to that, it was a typical Taylor a la carte menu. Her variation and movement is always what confounds opponents. She also has power, and even as Sanchez was using her long levers to score from a distance, Taylor was nipping to the side and underneath, snapping away and making her uncomfortable.

Her hand speed ensured that she beat Sanchez to the punch. Her power tired out her opponent and her hooks hurt, the left coming around from underneath to make it a hard, hard day for Sanchez at the office.

The judges gave the verdict to Taylor 3-0, which brings her to the cusp of qualification for Rio. Both Grainne Walsh and Kellie Harrington also fight for World Championship medals today. Taylor has five of those, but if either of the other two win their quarter-finals it will be the first time in women’s boxing that an Irish contender other than Taylor has made the podium.

All looks good for the Olympic champion, who meets Mexico’s Victoria Torres in the next round. She will also know that Yana Alekseevna, the Azeri fighter who beat her last month in Turkey, is creeping through the draw, having beaten Estelle Mossely. If the two win their next bouts, they will meet in the semi-finals.

“I always get better as the competition goes along,” Taylor said. “It’s phenomenal that three Irish girls are now in the quarter-finals. I’m so proud to be part of this team. It’s great they are performing and able to compete at this level.”