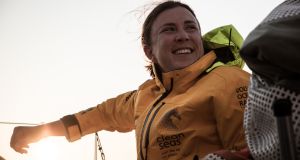 Annalise Murphy in calmer conditions on board Turn the Tide on Plastic during leg nine from Newport, Connecticut to Cardiff. Photograph: Volvo Ocean Race

We’ve arrived into Cardiff at the end of the ninth leg of the Volvo Ocean Race and completion of the transatlantic leg.

This marks the end of the oceanic stages and the two remaining legs are basically coastal races.

In fact, the nine days we’ve just sailed is longer than the remaining time at sea, even though the race itself doesn’t actually finish until June 30th.

But having had basically zero ocean racing miles last August to about 30,000 now is pretty good going and the remaining 1,500 nautical miles will fly by.

And we’re arriving back in Europe in time for summer, although the transatlantic was one of the coldest legs of the race. It’s a bit of a giveaway when you finish a leg wearing the same thermals you started out in; it’s just too cold to change clothes so we just bear with the whiff and dream of a nice hot shower on arrival.

This last leg also had a first that I’m not mad about reliving again.

I’ve always known that I’m prone to seasickness so I’ve taken all types of cures to avoid it and this strategy has worked the whole way around the world. Each to their own and my cure is a patch that goes behind my ear and it works a treat.

Except on the in-port display race around Newport just before we headed out to sea.

I was on the winch grinders and we had a huge amount to do so I was sweating hard. I must have sweated off the patch because that night, just as I was getting ready to come up on deck I got a sudden feeling.

I just barely cleared the main hatch and got to the deck in time to throw-up overboard for the first time in the entire race so far.

Our skipper Dee was really nice and came forward to offer me a little square of chocolate. Big mistake. She got projectile vomited at for her trouble.

I lasted the four hours of hell on that watch just about but it was 24 hours of misery thinking I was going to die and then it passed. Did I forget to mention it in last week’s log? Wow, it must have been really bad.

Despite the cold, it was an incredible leg with high-speeds that saw speed sailing records tumble.

These VO65s weren’t supposed to be as fast as the previous generation race boats that set records, but we beat the previous race best speed of 560 nautical miles in 24 hours while Akzonobel went on to break the 600 miles in a day barrier.

It also means we were constantly in firehose conditions on deck and had a relentless onslaught of water.

I was on the grinder when one wave hit. I could see it coming and knew what would happen. Even though I was bracing myself, I was taken off my feet in an instant by the river of water.

I was swept backwards several metres until my tether took hold.

Our tethers are set up to check us inside the cockpit and aren’t secured to anywhere near the edge of the deck. If we were and were swept overboard we’d need a quick release system as the force of being dragged through the water at 25 knots would probably be fatal.

We are all just so careful now.

The approach to the finish turned out to be fairly straightforward and we were glued behind the overall race leader Mapfre, who ended fifth and now slips to second overall just one point behind Dongfeng, the new overall leader.

Because we had steady conditions and a direct course to the finish, we weren’t called on deck from being off-watch so the last 24 hours of the leg meant I got fully rested.

For a little while I thought our routing was going to take us into the south-west coast of Ireland and up along past West Cork and the Fastnet Rock but the weather forced us south again.

Still, the closer we got to home the more excited I was getting.

And we’ve seen more wildlife on the stretch of water from south of the Fastnet to Wales than we’ve seen in the whole race.

On the last night at sea, we had a beautiful sunset followed by a stunning moonrise. And then dolphins appeared all around us, jumping in our bowwave, then swimming away and coming back again and again. We also had two different species of whale though it was too dark to identify them.

All this, in the middle of a race, out of sight of land on a 65-foot boat with a great team.

This is why I love sailing.