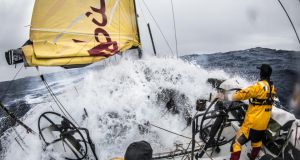 This is it, the legendary Southern Ocean that has been the hallmark of the Volvo Ocean Race and Whitbreads before it. All six boats are now deep and about as far away from land as we could be.

In fact, we’ve just passed Point Nemo that Jules Verne referred to as the farthest point in the ocean from land that is a tiny island more than 1,500 miles away.

We’re deep in the ‘roaring forties’ at 48 South and we could still drop further to the ‘howling fifties’, though you might be forgiven for wondering what the fuss is about as it’s fairly messy out here at the moment.

Having had several days of solid 30 knots and big seas, we’re experiencing a transition zone between depression that is giving anything from ten to 40 knots depending on where the clouds end up.

It all comes down to the decision to delay the start of this fifth leg from New Zealand to Brazil by three days to allow tropical cyclone Pam to move away to the east.

We’ve been skirting the leftover winds and getting some great surfing conditions, though it’s very, very wet on deck and below as well.

The transition means we’ve had a massive compression in the fleet from behind as the leaders suddenly run into lighter winds. We reckon the entire fleet will probably bunch up again as we sail into more light breezes of around eight to 10 knots.

But before we can think about getting back into a favourable tactical position, we have to contend with the ice-gate that the organisers have – thankfully – imposed on the race course.

So far, the only ice we’ve seen have been hailstones but we do know that two weeks ago a 1sq km iceberg was heading for the race course. Since then, its dropped to 750 metres in length so that means there are smaller chunks of ice floating around somewhere.

The original position was some 50 miles south of the original ice-gate, which has since been moved steadily north to protect the fleet: running into a growler – a smaller chunk of semi-submerged ice – at 30 miles an hour or more by night would probably be fatal.

Still, even though we have passed exactly over Point Nemo we have another 4,000 miles to race before we reach the finish at Itajai.

For now, the ice-gate is dictating our tactics but we should be past that within a few days and can concentrate on the approach to Cape Horn, which is likely to be tricky.

A low-pressure system off the Chilean coast is offering two routing options: northwards and around to the cape or southwards deeper into the Southern Ocean and potentially more hazardous.

Meanwhile, it’s great to have company from home back on the race course.

I laughed when I saw Damian Foxall on the dock in Auckland; I knew he wouldn’t be able to stay away from this race for long and was sure he’d turn up somewhere. He’s been brought on board Charles Caudrelier’s Dongfeng team for added experience for this tricky leg.

It’s good to see him back and even better to be ahead of him: Cork is featuring highly against Kerry on the scoreboard right now.

I got an email from Jim Slattery, my father, with a full report on the Six Nations and the fabulous result. While I was thousands of miles from a TV set, I’ve been hammering the poms on board with that story.

While we were in Auckland, we had some stars from the world of rugby join us for some sailing. Dan Carter has a grind-off competition against some of our younger guys, while I never in my wildest childhood dreams thought I’d end up grinding winches with Jonah Lomu in a Volvo Ocean Race Pro-Am race.

I’m just thankful it didn’t happen in his peak years.