US Open: Osaka faces Azarenka with more than title on the line 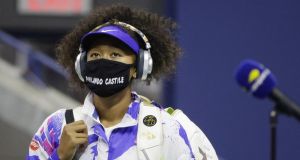 Naomi Osaka wears a mask bearing the name of Philando Castile ahead of her US Open semi-final. Castile, a 32-year-old black man, was shot dead after being stopped for a defective brake light in Minnesota four years ago. Photograph: Jason Szenes/EPA

It is six authored face masks and nearly a fortnight since Naomi Osaka, the reluctant conscience of Planet Tennis, uttered this truth at the outset of the US Open: “We’re all sort of in our separate bubbles, doing our own things.”

On the eve of playing Victoria Azarenka in the final on Saturday in a stadium named after an African-American player who spent most of his life and career butting up against prejudice, Osaka can look back on events that have both confirmed and challenged her assertion.

To her probably pleasant surprise, most (but not all) of her peers have emerged from their comfortable suites that circle the Arthur Ashe Stadium and acclaimed her gesture of wearing a different mask before every match to honour those African-American victims of racial violence that has sent parts of the country up in flames and ignited debate across the world about Black Lives Matter.

Osaka, born in Japan to a Haitian father and a Japanese mother, moved to the US aged three, so can see the world through different lenses. She began her Flushing Meadows odyssey by honouring the name of Breonna Taylor, who was shot dead in her home by police in March. Osaka said of the long list of those killed: “It’s quite sad that seven masks [are not] enough for the amount of names. Hopefully, I’ll get to the finals and you can see all of them.”

And here she is at 22 – young enough to be innocent, smart enough not to be – having so far commemorated the lives of Taylor, Elijah McClain, Ahmaud Arbery, Trayvon Martin, George Floyd and before her semi-final win over the fine young American, Jennifer Brady, on Thursday night, Philando Castile, a 32-year-old black man shot dead after being stopped for a defective brake light in Minnesota four years ago. A jury found the police officer not guilty of manslaughter.

These are crimes of bewildering randomness and injustice, with a long history and recurring pain. Martin’s mother, Sybrina Fulton, told Osaka by video link during the week: “We thank you from the bottom of our hearts. Continue to do well. Continue to kick butt at the US Open. Thank you.”

The world, of course, wanted Osaka to play Serena Williams on Saturday, in a re-run of their explosive 2018 final, when the contender stayed cool to beat her volatile inspiration. But the American, who has lived with racism for 38 years, would not be bounced into knee-jerk praise for Osaka’s crusade. “That was her decision,” Williams said. “It was good for her to come to that decision. As for me, you all know how I feel. I just feel like it’s a lot of injustice going on. I have other beliefs, more spiritual beliefs.”

And Osaka would not bite, either. “She’s a living icon. I would not be here without her. Anything she does I’m sure is really well thought out. She probably has a lot of conversations with a lot of people. Whenever she wants to talk, she’ll talk. I’m new to this game.”

But we’re here, also, to talk about tennis, right? The butt-kicking will not be easy. Osaka admits she is tired, barely sleeping but hoping her youth and conviction will still the pain in the sore hamstring she brought into the tournament after pulling out of the Cincinnati Open final against Azarenka at the same venue two Saturdays ago. She has played with it strapped for six matches and, while it has not noticeably slowed her movement, it can be difficult to read her take on such things.

After beating Brady 7-6 (1), 3-6, 6-3, she said recovering from the rigours of the fortnight could be a problem and she might not practise beyond warming up. “I don’t sleep during Grand Slams,” she said. “It’s probably going to just look like me laying in my bed with my eyes open, trying to will myself to go to sleep. Then I’ll just try to be as loose as I can in the moment.”

Azarenka, nine years older but also the owner of two majors, as well as one win in three against Osaka, brings her own baggage: a long custody battle with the father of her son, Leo, and a journey from Minsk at 15, to living the Californian dream via depression and injury, triumph and despair.

The Belarusian, as complex and thoughtful as Osaka, can also be disturbingly candid and said she has long struggled with the expectations of others. It beats talking about backhands.

“Mentally I’m in such a different place,” she said after winning a classic three-set semi-final against Williams. “Seven years ago, after I won the Australian Open, playing consistently with good results, it was expected for me to be in the final. That wasn’t the case this year. When you’re coming up from nothing and you become No 1 in the world, you can start to think you’re invincible, that you’re better than everybody. And it’s not true. The ego starts to grow. It’s very hurtful when it gets damaged.

“I tried to . . . learn from my mistakes that being a tennis player doesn’t make you better or worse than anybody else. You’re still human. I started taking more responsibility for what I do. The best tools [for that] were me losing a lot of matches. I could stay on my high horse or I could change. I’m not talking about [being] a better tennis player. I’m talking about [being] a better person for myself, for my son. Vulnerability is good. Having emotions is good.”

Being a better person has been an abiding theme of these championships. Osaka has worn her halo lightly, Azarenka, raised a Catholic in Belarus, has been in confessional mode. Their final should be as engrossing as human theatre as much as a mere tennis match. – Guardian