Anita Brody says €560m fund that may need to cover 20,000 players over 65 years is insufficient 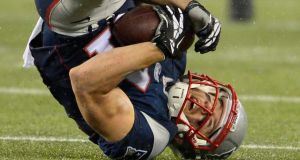 US Federal judge Anita Brody: ‘Even if only 10 per cent of retired NFL football players eventually receive a qualifying diagnosis, it is difficult to see how the monetary award fund would have the funds available over its lifespan to pay all claimants at these significant award levels.’ - Photograph: CJ Gunther/EPA

A federal judge has preliminarily rejected a €560 million ($765m) settlement of NFL concussion claims, fearing the sum may not be enough to cover injured players.

US district judge Anita Brody has asked for more financial details from the parties, a week after players’ lawyers filed a lengthy payout plan.

Brody, in her ruling on Tuesday, notes that the plan may have to cover nearly 20,000 men for 65 years.

The Philadelphia judge says she is mostly concerned that not all retired players who are someday diagnosed with a related brain injury will be paid.

The proposed awards were expected to reach €3.6m ($5m) for athletes with amyotrophic lateral sclerosis, or Lou Gehrig’s disease; €2.9m ($4m) for a death involving brain trauma; and €2.2m ($3m) for dementia cases.

Brody wrote in a 12-page opinion: “I am primarily concerned that not all retired NFL football players who ultimately receive a qualifying diagnosis or their (families) ... will be paid.”

“Even if only 10 per cent of retired NFL football players eventually receive a qualifying diagnosis, it is difficult to see how the monetary award fund would have the funds available over its lifespan to pay all claimants at these significant award levels.”

The lawsuit, filed in 2012 on behalf of 4,500 former players, contended that the league hid the dangers of brain injury players faced while profiting from the sport’s sometimes violent physical contact. When the settlement was first disclosed in August, sports business experts described it as a modest amount of money for the NFL, which is believed to generate total annual revenue of more than €6.6 billion ($9bn).

The NFL reached the agreement without accepting liability for the injuries. The players’ lawyers said they would face huge challenges to get the case to trial: They would have to prove the injuries were linked to the players’ NFL service and should not be handled through league arbitration.

The players in the lawsuit include former Dallas Cowboys running back Tony Dorsett and Chicago Bears quarterback Jim McMahon, who suffers from dementia.

In recent years, there have been suicides among current and former NFL players, including Jovan Belcher and Junior Seau. While none of those deaths could be directly connected to the sport, violent or erratic behavior is consistent with symptoms of a condition tied to repeated hits to the head many players endure in games and practices.

A growing body of academic research shows those hits can lead to a condition known as chronic traumatic encephalopathy, which can lead to aggression and dementia.

The research has already prompted the NFL to make changes on the field, including banning the most dangerous helmet-to-helmet hits and requiring teams to keep players who have taken hits to the head off the field if they show symptoms including dizziness or memory gaps.

Lawyers for the retired players released a statement on Tuesday: “We are confident that the settlement will be approved after the Court conducts its due diligence on the fairness and adequacy of the proposed agreement. Analysis from economists, actuaries and medical experts will confirm that the programs established by the settlement will be sufficiently funded to meet their obligations for all eligible retired players. We look forward to working with the Court and Special Master to address their concerns, as they rightfully ensure all class members are protected.

“We believe this is an extraordinary settlement for retired NFL players and their families, and have received overwhelming support as they have learned about its benefits. We look forward to finalizing this agreement so they can soon begin taking advantage of its benefits.”