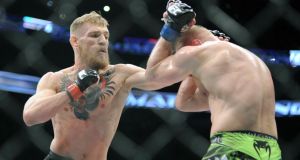 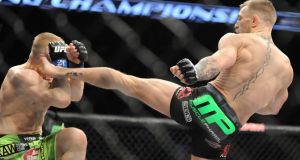 UFC promoters have indicated that the bout was the final outing for McGregor before a 145-pound (10st 5lb) featherweight title fight later this year. Photograph: Inpho/Emily Harney 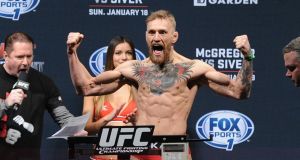 Conor McGregor weighs in before his bout against Denis Siver. Photograph: Emily Harney/Inpho

With odds of 1-12 in his favour, a victory for Conor McGregor on Sunday should have been considered a mere formality. But such is the Irishman’s star quality, the crowd at Boston’s TD Garden still erupted into wild celebration when McGregor defeated Dennis Siver in the second round of their Ultimate Fighting Championship bout.

In the build-up to the event it was made clear by the UFC promoters that the bout was the final outing for McGregor before a 145-pound (10st 5lb) featherweight title fight later this year. Similar promises were not made for Siver, who was rarely featured in the promotional material and was in a main event despite just one official victory in his last three fights. Even so, the 19,000 arena was a virtual sell out.

Large swathes of the crowd were decked out in green, singing The Fields of Athenry and Olé, Olé, Olé; an indication of Boston’s Irish heritage and the many fans that traveled from Ireland. The strong ticket sales were particularly impressive given that the local New England Patriots played a major NFL game that night just a few miles outside the city.

Those in attendance and watching on Fox Sports in the US didn’t get much of a contest, but they were treated to an exhibition of McGregor’s exceptional mixed martial arts talent. Utilising his long reach to keep the shorter Siver at bay, McGregor continually unleashed strikes from a variety of angles, which landed with violent accuracy. After several minutes the 36-year-old Siver’s face was bloodied and swollen.

Siver was brave and remained dogged, but the fight could have been stopped after the first round as the German-Russian staggered back to his corner. Yet the bout was allowed continue until the inevitable finish came 1 minute and 54 seconds later as McGregor mounted Siver and unloaded a barrage of punches and elbows, forcing the referee’s stoppage.

Afterwards McGregor lept out of the cage and into the crowd where featherweight champ Jose Aldo was seated. The two exchanged words, with McGregor saying that Aldo had better polish the championship belt for him. Reflecting on the Siver fight, McGregor said “I felt comfortable throughout. I don’t think Dennis posed a threat. I predicted two minutes, but I meant two rounds.”

Congrats to the McGregor-nator @TheNotoriousMMA on terminating another opponent. Can't wait for your world championship fight. I'll be there

Arnold Schwarzenegger, also known as The Terminator, tweeted his appreciation of McGregor's win.

It was a mixed night for Irish fighters on the undercard as Cathal Pendred and Paddy Holohan won decisions, while a tight split decision went against Norman Parke. Yet judging on noise, there seemed to be only one man that the crowd came to see. McGregor knows better than anyone how to draw attention, and leading up to Sunday’s bout he did his utmost to get in front of the American media.

“He’s been in Boston for weeks,” said UFC president Dana White of McGregor’s promotional efforts. “He’s doing things for charity, he’s gone down to ESPN [in Connecticut] and done interviews, he’s done all the promos Fox needed him to do and he’s done a ton of media and PR.”

Characters like McGregor, who bring entertainment inside and out of the octagon cage, have been in short supply in the UFC recently, thus explaining the big promotional push behind the Irishman.

Valued at $1.65 billion by Forbes magazine, the UFC is by far the world’s largest mixed martial arts (MMA) organisation. However, it has had a difficult 18 months. The shine has dimmed on some of its biggest stars, with Georges St Pierre taking an extended hiatus and Jon Jones found with cocaine on his system just three weeks before a major fight.

Even Dana White noted that pay-per-view sales declined last year; a rare admission of concern from the typically boastful executive.

The UFC has also come under criticism in some corners for having a seemingly indifferent attitude to performance enhancing drugs. Indeed, Siver tested positive in December 2013 for the banned human chorionic gonadotropin (hCG). He served a nine month suspension, but some believe that the UFC sent a wrong message by giving him such a high-profile bout against McGregor so soon after returning from his ban.

The UFC hope that McGregor can help drive better publicity in 2015, and his challenge of Aldo in Las Vegas will surely be among the biggest MMA events of the year. Aldo does not have the star power of McGregor, but the 28-year-old Brazilian is regarded as one of the sport’s finest pound-for-pound fighters and has made seven defences of the title. McGregor could be the underdog, but he’ll still be the big favorite of UFC executives.

The organisation was also likely pleased by Siver on Sunday. He was game, but was ultimately defeated and absorbed a tremendous amount of punishment to give the crowd some entertainment.

Walking gingerly back toward the dressing room after the fight with a baseball cap pulled over his heavily bruised face, Siver received a respectful clap from a group of McGregor fans who had earlier booed him on his way to the cage.

Siver, looking through swollen eyes, acknowledged the recognition with a nod of his head.