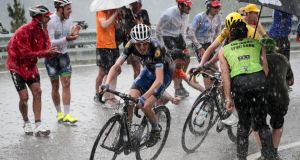 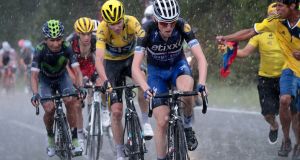 As a deluge of rain and hail fell on the super-category climb here, amid the lowering Pyrenean skies there was a little clarity over the identity of the men who may eventually stand in Chris Froome’s way as he bids to win his third Tour de France.

With the Dutchman Tom Dumoulin assured of stage victory, further back down the hillside the first major skirmish of the 2016 race developed around Froome, as the race leader was attacked time and time again by two men: Irishman Daniel Martin and his former team-mate Richie Porte.

Two others kept a watching brief. Nairo Quintana barely moved an inch from Froome’s wheel but never showed any inclination to put the Kenyan-born Briton under pressure, while Adam Yates occasionally slipped off the pace but had the strength to snatch the sprint for 10th place ahead of Froome and the other three. Yates maintained his second place, 16 seconds behind Froome, while Martin moved ahead of Joaquim Rodríguez into third overall, 19 seconds back.

Others had started the day with pretensions to a place on the podium or a possible challenge, but were unable to hold the pace when Froome’s team-mate Sergio Henao launched a searing attack with five kilometres remaining.

The Italian Tour debutant Fabio Aru lost a minute, which does not bode well, but Romain Bardet and Rodríguez limited their losses. Like Quintana, the pair remain within a minute of Froome along with Henao, the Dutchman Bauke Mollema – another energetic attacker here – and the South African Louis Meintjes. The race, like the weather, has yet to settle.

Of the quartet who finished with Froome, the enigmatic Quintana is by far the most threatening, as a previous winner of the Giro d’Italia and twice runner-up in the Tour.

Porte lost time on stage two, but will have taken heart from his riding in the Pyrenees. Martin has a pedigree as a climber, and as one with a talent for finding openings, but has previously tended to fall apart in the Tour’s final week, while Yates is an unknown quantity, whose plan this year was to aim for stage wins.

“It’s still a very open race at this point,” said Froome, who attacked twice, but was unable to dislodge Quintana or Porte. “There were a lot of attacks on that final climb. I was hoping to gain time, but at the end there were a few contenders in front so I made sure to finish in the same time as them. I was waiting for Quintana’s attack all up the climb, I thought he was waiting for one big one, but it never came.” He added, optimistically: “I’d like to think he was on his limit.” The Colombian might have been. Or he could have been biding his time.

Sky’s plan appeared to be for Henao’s move to put Froome’s rivals under pressure, so that the leader could perform the coup de grâce but, instead, it was Froome who faced a welter of attacks.

His rivals can take encouragement from the opening weekend of heavy-duty climbing: unlike in the past at this point of the race, Froome has been unable to open a decisive gap, while Team Sky have spent two major stages riding defensively in debilitating heat to no major effect. Over the first climb, the Port de la Bonaigua, for example, Alberto Contador and Alejandro Valverde put on the pressure, and the British team had to respond.

Before the four horsemen of the Apocalypse saddled up around Arcalis and the temperatures plummeted, the thermometer topped 40 degrees, meaning Sky seemed unwilling to expend energy keeping tabs on a large group of escapees as the race approached Andorra.

Up front, Dumoulin kept a watching brief over two horrendously steep ascents through the principality – the first-category Col de Beixalis was little more than a tarmac goat track – before taking flight at the foot of the final ascent.

The escape also included all three contenders for the King of the Mountains jersey: Rafal Majka, Thomas de Gendt, and France’s Thibaut Pinot, whose hopes of overall victory disappeared on Friday. De Gendt literally came to a standstill on the Beixalis, while, as Dumoulin forged ahead, Majka and Pinot marked each other like hawks until the Pole – the best climber in 2014 – disappeared with the Portuguese Rui Costa.

The Frenchman has the jersey, however, and it may well end up as a consolation prize rather than the yellow he had hoped for. Guardian service