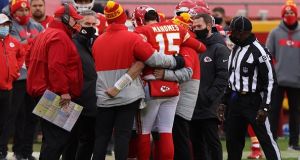 Quarterback Patrick Mahomes of the Kansas City Chiefs is assisted off the field at Arrowhead Stadium. Photograph: Getty Images

The Kansas City Chiefs held off a second-half Cleveland Browns fightback without star quarterback Patrick Mahomes to go through to the AFC Championship game.

Mahomes suffered a concussion in the third quarter, after struggling with a toe injury during the game, and the Chiefs had to finish with Chad Henne at quarterback.

Last year’s Super Bowl winners took an early lead, going 6-0 up after Mahomes opened the scoring with a touchdown he took himself as he deftly avoided the Browns defence, but they missed the extra point.

At the start of the second quarter Travis Kelce got the touchdown from a Mahomes pass to take the Chiefs to a 13-3 lead, with Harrison Butker kicking a 50-yard field goal, before they extended their lead before half time to 16 points.

The Browns had to wait for their first score, but drove in eight plays through 77 yards before Baker Mayfield threw to Jarvis Landry for a touchdown to close the gap to just nine points.

The Cleveland comeback continued after Mahomes was forced from the field, with Kareem Hunt scoring to cut the Chiefs’ lead to five.

The Chiefs secured victory in the final moments when Chad Henne ran it long and almost reached the marker, before sending a short pass to Tyreek Hill on the next play to convert for the first down and clinch the game.

The Chiefs will meet the Buffalo Bills in next week’s AFC Championship for a place in Super Bowl LV.

Their opponent will be either the Green Bay Packers or the Tampa Bay Buccaneers, who will face off in the NFC Championship game after the Bucs defeated the New Orleans Saints 30-20.

The divisional round contest was a battle between two veterans in Tampa Bay’s Tom Brady and New Orleans’ Drew Brees, who played what was likely his final game in the NFL.

Brady was helped hugely by his side’s defence and strong running game and crucially did not throw any interceptions like his opponent did, with the Buccaneers’ team captain tossing for 199 yards and two touchdowns as he rushed for another score.

Joey Carbery on the Munster bench again for Connacht clash 12:35
Peter O’Mahony signs new deal with Munster and IRFU to 2023 10:54
Man United could stop Bruno Fernandes from playing for Portugal in March 09:31
Another stalemate for Man United; Robbie Henshaw leading the way for Ireland 07:54
Continued absence of anti-doping tests for GAA intercounty elite 06:44