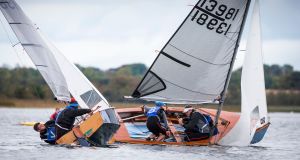 If ever there was a case to have Team Racing included as standard in the line-up for the All-Ireland Sailing Championships, then last weekend’s senior event served this purpose well.

In near calm conditions at Mullingar Sailing Club, patience was rewarded by a three-way battle for the annual “champion of champions” title and a name on the coveted silver salver that is now 70 years old.

Baltimore’s Fionn Lyden with crewmate Liam Manning from Schull delivered a masterclass in dynamic tactics to win the event but only after splitting the final score that was tied on points and equal on first and second places.

The series hinged on worst discards, something that Lyden knew but even after the series admits he wasn’t 100 per cent certain of as the final race played out in less than five knots of breeze.

In the first final race, Lyden got the better of defending champion Alex Barry from Monkstown Bay SC after a tacking duel. That result would prove crucial later.

In the final race, the West Cork duo were again locked in a match race, this time with GP14 World Champion Shane McCarthy with Andy Davis from Greystones SC.

Although McCarthy managed to keep Lyden behind him – it was crucial to his hopes of a win that he did – the Wicklow sailor also needed to finish in third place or better in the inevitable tie-break between the three top boats.

However, Lyden succeeded in drawing McCarthy out to the side of the race course and both boats finished at the back of the fleet. Lyden’s worst score in the series had been a third place – his discard – which was the tie-break needed to win.

He won with a point to spare over Barry and claimed the trophy. Had the earlier match race gone Barry’s way, he would have retained his title.

“It’s been the most intense racing I’ve done in at least three or four years,” a thrilled Lyden told the Irish Times this week. “It was so close I’m still not completely certain of all the permutations and I was hoping that I had it calculated correctly in the final race.”

The Irish Team Racing Association succeeded in securing a wildcard nomination to the senior championship and both he and UCC team captain Manning are hopeful that the discipline will now have a permanent place in the format for the All-Irelands.

Team Racing differs from other sailing formats in that extra emphasis is placed on tactics to deliver a winning combination between three team boats racing against a rival team’s three boats.

The format is the standard for varsity sailing and is seen as a backstop against loss of youth participation in the sport that is evident after junior sailing ends in late-teens.

Team Racing is becoming a popular option for clubs to involve younger sailors without needing to own boats as a six-boat fleet can be swapped between multiple teams and groups of participants.