NFL round-up: Mike Pence should have stuck around - he missed a cracker 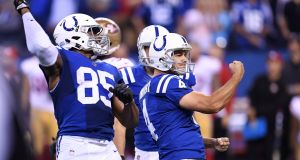 The San Francisco 49ers’ winless streak continued following a dramatic 26-23 overtime defeat at the Indianapolis Colts which grabbed headlines due to the early departure of US vice-president Mike Pence.

Former Indiana governor Pence, who was at the Lucas Oil Stadium to watch a jersey retirement ceremony for Colts great Peyton Manning, walked out after several 49ers players took the knee during the national anthem as part of ongoing protests against perceived racial injustice.

On the field, Adam Vinatieri kicked the winning field goal – his fourth of the match – nine minutes into the additional period to earn Indianapolis a second victory of the season following earlier rushing touchdowns from Marlon Mack and Jacoby Brissett.

The struggling 49ers, who have now lost their opening five matches of the NFL season, had battled back to force overtime thanks to touchdowns from running back Kyle Juszczyk and tight end George Kittle.

The Kansas City Chiefs remain unbeaten after a 42-34 win over the Houston Texans.

The Chiefs took charge of the game right from the off, leading 23-7 by half-time, thanks to two touchdowns from Charcandrick West.

A late rally from the Texans, which saw Will Fuller and DeAndre Hopkins twice find the end zone in the third and fourth quarters, was not enough to see off the Chiefs, the only team with a 100 per cent record this season.

Aaron Rodgers found Davante Adams with a 12-yard pass in the dying seconds as the Green Bay Packers beat the Dallas Cowboys 35-31.

The Packers – who are now 3-1 – started their final drive on their own 25 yard line with 1:13 left on the clock, but Rodgers masterminded a drive to the redzone and connected with Adams on a short pass to the left to take the win.

The Baltimore Ravens took a 24-10 lead into half-time and did not relinquish the lead over the Oakland Raiders.

Vince Mayle ran in a touchdown in the opening minutes for Baltimore before Jimmy Smith picked up a Jared Cook fumble and found the endzone minutes later.

While the Raiders looked to be making a comeback in the third thanks to a touchdown by Marshawn Lynch, they could not overcome the kicking power of Justin Tucker.

The place-kicker saw out the game with two field goals in the fourth quarter to beat the Raiders 30-17.

Barring a charge in the second quarter, the Seattle Seahawks did not have to put up too much fight in their 16-10 victory over the Los Angeles Rams.

A touchdown by Tavon Austin and field goal by Greg Zuerlein was matched by the Seahawks’ Jimmy Graham and Blair Walsh – with Walsh on song, kicking three from three field goals.

Russell Wilson completed 24 from 37 passes for 198 yards and a touchdown in the win.

Quarterback Wentz tossed successful scoring passes to Trey Burton, Zach Ertz and Torrey Smith in the first quarter before picking out Nelson Agholor with a 72-yard throw in the third period to give the Eagles a third successive win.

Cam Newton was another man in form, throwing three touchdowns to help the Carolina Panthers secure a slender 27-24 victory at the Detroit Lions.

Newton, who came under fire earlier in the week for an alleged sexist remark to a female reporter, picked out Christian McCaffrey, Devin Funchess and Kelvin Benjamin as the Panthers held off a late Lions fightback to move 4-1.

At the MetLife Stadium in New Jersey, Philip Rivers threw a 10-yard touchdown pass to Melvin Gordon with less than three minutes remaining as the Los Angeles Chargers ended a nine-game losing streak with a 27-22 victory over the winless New York Giants.

Elsewhere, the Buffalo Bills went down for the first time in three matches as they were beaten 20-16 at the Cincinnati Bengals, the Cleveland Browns remain without a win after they lost 17-14 at home to the New York Jets, the Jacksonville Jaguars won 30-9 at the Pittsburgh Steelers, while Jay Cutler produced a fourth-quarter touchdown pass as the Miami Dolphins beat the Tennessee Titans 16-10.