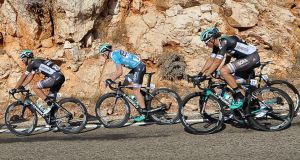 Bennett appears to be more dominant each day, drawing on the confidence of winning stages one and two this week and wearing the race leader’s jersey. The victory is actually his fourth consecutive success. Prior to heading to Turkey, he won the Sparkassen Münsterland Giro in Germany in a sprint, beginning what has been the longest winning streak of his career thus far.

“I’m delighted, After the first stage I was wondering, can I get another,” Bennett said. “After the second, I was like, two in a row, I’ll be lucky to get another one, and here I am.

“I couldn’t have dreamed of this. I’m absolutely delighted. Since Cyclassics Hamburg [on August 20th], for some reason I set this race as a target. I wanted good results here. I was supposed to end my season at Münsterland, but I said to my team, ‘can I do Turkey?’ I’m normally motivated and good in the late season, I wanted to get some results. and we’re actually doing it.”

Key to Bennett’s victory was staying in contact with a rapidly-thinning bunch on the uphill close to the finish. “It was a hard last climb,” he explained. “I really didn’t know how I would react. I saved everything for it, I tried to keep a good position. I saw a bit of a split happening at the top and I tried to close it early. When I was a teenager, my coach then said it’s always better to close a gap early.”

Speaking after Wednesday’s second stage win, Bennett said that he had set himself a season target of ten victories. His win on Thursday brings him up to nine. While the overall classification is almost certainly beyond him due to Friday’s uphill finish, it seems possible for him to achieve that ten victory goal by the time the Presidential Tour of Turkey ends on Sunday.

Bennett will begin Friday’s stage to Selcuk with a 14 seconds advantage over his closest rival, Theuns.

In other news, the race director of the Junior Tour of Ireland has announced on Thursday that the current backing by Scott Bicycles will not continue past this third year of sponsorship. It means that the race must now find a new backer for 2018, putting it in a similar position to the An Post Rás and the An Post Rás na mBan.

“Scott Bicycles gave the race a lifeline as title sponsor when sponsorship was so difficult to find,” said Alice Sheratt. “For that we are eternally grateful to them because they are now leaving the race in a far better state than when they found it.

“It is difficult that I break this news at a time when so many other races have lost their title sponsors also, but we have been in this position in the past and it is now back to the drawing board to try and make up the shortfall to ensure the 40th edition in 2018 continues to progress.”

On the topic of sponsorship searches, Sean Kelly told the Irish Times this week that his team’s hunt for new backing is getting close to the cut-off point. “Time is tight. The first of November is the deadline to register with the UCI. We need to sign riders before then. We are hoping that we can secure sponsorship it in the next three or four days…that would be okay. But if it drags on much longer….”

The team is currently negotiating with an Irish and a Spanish company. One or both could potentially take over as title backers from An Post and Chainreaction

1 Owen Doyle: Creeping professionalism of schools rugby a threat to the game
2 Caroline Wozniacki’s career ends with defeat to Ons Jabeur
3 Niall Quinn happy to step into the breach at FAI
4 GAA officials and referees brace themselves as new rules kick in, and this time it's for real
5 Scotland’s Finn Russell missed training after Sunday drinking session
Real news has value SUBSCRIBE