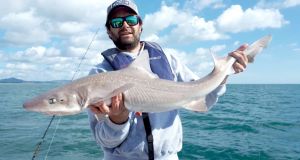 Robert Millard with his specimen smooth hound of 110cm, caught in Greystones, Co Wicklow, in 2019

While the vast majority of anglers continue to remain outside the travel restriction limit due to coronavirus, I continue with some more fishy tales from the files of Tom Quinn’s book, Fishing’s Strangest Days.

Americans like to make sure the customer is always satisfied, which might explain why their fishing clubs can seem bizarre by European standards. But the long-vanished Turnstile Fishing Club in California must count as one of the strangest, even by American standards.

An English fisherman in the 1930s remembered agreeing to visit the club because he was intrigued by his host’s assurance they could fish despite the fact it was two o’clock in the morning.

“We fish whenever we like,” said the host. “We’ve got it all sorted. The trout are there and the club make sure they’re always biting!”

Arriving at the club the visitor was greeted by a doorman who ceremoniously took his coat and offered him a fishing rod and a fly. He was then invited to step out on to a specially built veranda.

By this time the fisherman thought he wandered on to a film set. All around were mounted trophies and paintings of fish on walls designed to look like an Austrian hunting lodge, yet this was a modern concrete building on the edge of an artificial lake.

Then the front of the veranda suddenly became illuminated by bright lights. Two huge doors slid open and the lake was there right in front of him. The fisherman was invited to cast and within seconds he caught a fish.

Most casts produced a rise or a hooked fish, but then after half an hour the lights went out and the fisherman was told that was the end of his session. Just as he was leaving he was presented with his successful fly carefully mounted in a box.

“I hope it will remind you of a very special and successful outing,” said the doorman as he handed the fisherman his coat.

A Reading newspaper in 1868 reported the remarkable story of a nine-year-old boy who spent a quiet Sunday in May fishing with his pals in an old pond near a mill just outside the town.

Rumours had spread among local schoolchildren that this pond contained a huge pike that had been fed for years by a local butcher who came down regularly and chucked masses of offal into the water.

The butcher planned to wait until he was sure the pike had grown to record proportions and then catch it, but the local schoolboys thought they’d beat him to it.

On the day in question, the boys arrived early and tackled up with heavy, crude but effective gear. Thick cane rod, iron reel, very heavy line, wire traces and some small dead roach for bait.

By lunchtime only one boy was still fishing, while the others played hide and seek along the banks. He was determined not to give up and rolled up his trousers and waded out into the pond.

A short time later, a loud scream bellowed out and the boys looked up just in time to see their friend topple into the water. Luckily he raised a hand as he was about to slip under for his pals to reach him.

As they dragged him to the shallows semi-conscious, they looked down at his feet and saw the biggest pike ever with its massive jaws clamped tight around his foot.

The pike was well over 4ft long and astonishingly, despite all the commotion, it still hadn’t let go. They threw pebbles at the pike’s head until with a great shrug it turned and disappeared back into the green depths.

The cuts on the boy’s foot were not serious and despite swallowing some water he soon regained consciousness.

For years after the newspaper report appeared, seasoned pike fishermen came to the pond, but despite their attentions the big pike was never caught again.

The Office of Public Works was pleased to participate in the recent National Biodiversity Week to raise awareness of the importance of biodiversity and to showcase a selection of work taking place across its sites.

From an angling perspective, one such initiative includes reintroducing spawning gravel into suitable drained rivers across the country from Donegal to Wexford, to improve salmon and trout spawning habitats.

Maurice Buckley, OPW chairman, said: “We are in the process of developing a Biodiversity Action Strategy 2020-25, with input from a newly formed working group to ensure compliance with government policy but also to champion biodiversity.”

Continuing this week with a specimen smooth hound as recorded in the 2019 Irish Specimen Fish Report, I include Robert Millard’s fish of 110cm, caught at Greystones, Co Wicklow, on peeler crab, in June.

1 Georgia and Fiji in line to join Six Nations sides in eight-team tournament
2 Sport rallies around David McGoldrick following online racial abuse
3 ‘Jack used to call me his official grasshopper keeper. We had a great time’
4 Ken Early: Another Mourinho masterclass in going through the motions
5 Andy Moran on moving on from a Mayo career that glowed golden to the end
Real news has value SUBSCRIBE