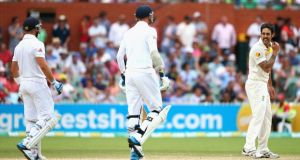 Mitchell Johnson has words with Stuart Broad and Matt Prior during day four of the second Ashes Test in Adelaide. Photograph: Ryan Pierse/Getty Images

The Ashes combatants tried to make light of a series of ill-tempered exchanges as things turned ugly near the close of a long, hot fourth day in the City of Churches, but were left with a 24-hour wait to discover whether the International Cricket Council holds a similarly relaxed view.

The clashes were arguably more serious than those that led to a fine for the Australia captain Michael Clarke, and the intervention of the ICC match referee Jeff Crowe, after the stormy first Test in Brisbane, as England’s debutant all-rounder Ben Stokes made physical contact with Mitchell Johnson before Matt Prior, Stuart Broad, Brad Haddin and Clarke all joined the fun in the last over of the day.

Broad then exchanged further words and gestures with Johnson as the players left the field, while Prior continued the animated conversation with Haddin that had been running throughout his innings.

But England confirmed at the close that they had yet to hear anything from Crowe. Joe Root, who also copped some verbal punishment from Johnson to match the bruises he was nursing after an encouragingly gutsy 87, joined Australia’s Peter Siddle in wondering innocently about all the fuss.

“It’s good confrontation,” said the baby-faced 22-year-old, who maintained the tactic he first employed in Brisbane of smiling his way through Johnson’s assault with mouth and ball, and allowed England to claim justification for their decision to promote him, rather than Ian Bell, as Jonathan Trott’s replacement at No3.

“It’s certainly good to be involved in that in the middle. You know you’re in a battle, you know you’ve got to fight for your country.

“I didn’t feel there was anything going on out there. You want to play hard cricket, and it’s Ashes cricket - you’d expect that. You’d be disappointed if there wasn’t a bit of rivalry and what-have-you. I think it makes it entertaining cricket to watch.”

Siddle, who dismissed Kevin Pietersen for the second time in the match and the ninth in Test cricket, attempted humour, probably rehearsed rather than off the cuff, when asked about the aggro. “Pup (Clarke) walked in to have a look at the light, and Broady was asking Mitch where to go for dinner tonight,” said the Victorian veteran.

“There wasn’t a lot to it. It’s no more than we’ve ever seen in the history of cricket. You can say what you want but being out there, there was not much being said at all. Obviously you’re (the media) trying to build it up, but yeah, the boys are out there, it’s been a long day, it’s been a tough day, and Mitch was just trying to get the job done. That’s all it was. I’ll just leave it there.”

Siddle said Australia had been reasonably impressed by Stokes’s readiness for the fight on his debut, as he batted more than two hours for 28 and dropped his shoulder into Johnson in a mid-pitch collision that would not have been out of place on the New Zealand rugby league fields where his father Ged used to play.

“He looked all right, he dug in,” Siddle said of Stokes, who had also exchanged words with Haddin after being deprived of his first Test wicket by a no-ball on Friday. “I think we’ll be seeing a bit more of him.”

Root confirmed that England had been determined to be confrontational rather than submissive as they aimed to make amends for their feeble first-innings performance. “We had a scrap on - we knew we had to front up and show we were up for a fight,” he said.

“We knew we had to make sure everyone watching and playing knew we were in a battle and weren’t going to lie down, we were going to show a bit of courage and be there at the end of the day. That’s going to have to continue for the rest of the series.”

England are staring down the barrel of a second straight defeat, the tourists finishing the day on 247-6 and needing a further 284 runs to win or to bat through Monday to save the test.

Some rain and a possible storm is expected on Monday, but a similar forecast for Sunday failed to stop a minute of play. - Guardian Service