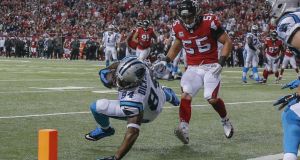 Carolina Panthers tight end Ed Dickson (L) dives for a touchdown against Atlanta Falcons inside linebacker Paul Worrilow during the first half of their NFL American football game at the Georgia Dome in Atlanta (Photograph: EPA/Erik S. Lesser)

The defending Super Bowl champion Seattle Seahawks claimed the number one seed in the NFC playoffs with Green Bay Packers, Carolina Panthers and Pittsburgh Steelers adding divisional titles after wins on the final Sunday of the regular season.

The Baltimore Ravens also made the postseason, taking the final AFC wild-card berth thanks to a victory over the Cleveland Browns and the San Diego Chargers’ loss to Kansas City.

The Seahawks head into the playoffs on the back of six straight wins -- the latest a 20-6 victory over the St. Louis Rams which secured the NFC West divisional title.

The New England Patriots had already secured the top seed in the AFC and they and the Seahawks will enjoy a first round bye and home field advantage throughout the playoffs.

Green Bay won the NFC North for the fourth year in a row after defeating the Detroit Lions 30-20 while Carolina clinched the NFC South thanks to a 34-3 crushing of the Atlanta Falcons.

Pittsburgh grabbed the AFC North title with a 27-17 victory over the playoff-bound Cincinnati Bengals and Baltimore made the postseason by topping the Browns 20-10.

Seattle started slowly against St. Louis, but a nine-yard touchdown run from Marshawn Lynch and a 49-yard interception return by Bruce Irvin in the fourth quarter made sure the road through the NFC playoffs goes through Seattle.

The Packers’ delight at their divisional title was tempered by concern over the left calf of quarterback Aaron Rodgers.

Rodgers aggravated a calf injury, which had kept him out of practice, when throwing the first of two touchdown passes to Randall Cobb late in the second quarter.

After going to the locker room, Rodgers, despite a noticeable hobble, returned in the third quarter, finding Cobb again with a 13-yard touchdown pass to restore Green Bay’s lead after a second Calvin Johnson touchdown reception for the Lions had tied the score at 14-14.

Rodgers even managed to push himself into the end zone for a one-yard touchdown as the Packers made sure of the divisional prize, which earns the quarterback a much-needed week off.

The NFC South has been a weak division but while Carolina enter the playoffs with a losing record 7-8-1, they have won their last four games.

Falcons quarterback Matt Ryan threw two interceptions, both of which were returned for touchdowns as Carolina’s defense dominated.

Antonio Brown scored touchdowns on a 71-yard punt return and a 63-yard pass play as Pittsburgh won their first division title since 2010.

The San Diego Chargers went into Sunday knowing a victory would take them into the postseason but their 19-7 loss to the Chiefs opened the door for the Ravens.

Baltimore trailed Cleveland 10-3 at the end of the third.

But quarterback Joe Flacco took control, throwing for two touchdowns as the Ravens took advantage of the Chargers’ slip.

The outcome means the AFC North will have three teams in the playoffs -- Baltimore, Pittsburgh and Cincinnati.

The Dallas Cowboys head into the playoffs in strong form, crushing of the Washington Redskins 44-17, while Rex Ryan, expected to be fired by the New York Jets, enjoyed a 37-24 victory over the Miami Dolphins.

Sunday also marked coach Jim Harbaugh’s final game with the San Francisco 49ers. The team announced after a 20-17 victory over the Arizona Cardinals that Harbaugh would be leaving.

The Tampa Bay Buccaneers will have the first pick in the 2015 draft after finishing with the worst record in the regular season (2-14) following a 23-20 loss to New Orleans.