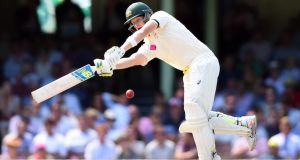 Australia captain Steve Smith broke Sir Donald Dradman’s record as he finished the series against India on 769 runs following hos 71 on day four of the final test at the SCG.

Skipper Steve Smith led the way with another torrent of runs as Australia raced to 251 for six and a lead of 348 over India before rain stopped play at the end of the fourth day of the fourth test on Friday.

Looking to wrap up the four-match series 3-0, the hosts dismissed India for 475 shortly before tea to take a 97-run first innings lead and then embarked on a fierce assault on the Indian bowlers in a bid to force a result.

It started poorly when spinner Ravichandran Ashwin (4-104)had David Warner (4) caught in the slips after facing five balls and Shane Watson played on for 16.

Opener Chris Rogers, though, hit a 77-ball 56 before he was caught at midwicket off Bhuvaneshwar Kumar and Smith was soon back in his considerable stride.

The Australian captain raced to his half century in 44 balls and had soon passed Donald Bradman as his country’s highest scorer in a series against India.

Shaun Marsh came and went for a single run to give Ashwin his third victim before Smith’s 93-minute innings came to an end when Mohammed Shami trapped him plumb lbw.

His 71 brought his series tally to 769 and a group of fans in the member’s stand bowed low to him as he walked back to the Sydney Cricket Ground dressing room to ponder his declaration.

Joe Burns took up the mantle and hit three sixes and eight fours in his 39-ball 66, while Brad Haddin ably assisted with 31 not out.

“It was lots of fun,” Burns told reporters. “It’s a fantastic opportunity to come out tomorrow and win a test match for Australia, so very exciting.

“The wicket spun and I think it will only get harder to bat on as the game goes on. I’m sure we’re going to create 10 opportunities. It’s just a case of taking all 10.”

India captain Virat Kohli has been no slouch with the bat in this series but he was only able to add seven runs to his overnight score before clipping a Ryan Harris delivery to Rogers at midwicket some 20 minutes into play.

The 147 helped bring his tally over the four tests to 646 runs, the second highest by an Indian batsman in an overseas series after the 774 Sunil Gavaskar accumulated in West Indies in 1971.

Despite the Indian tail wagging for the first time in the series and good batting conditions, the Australians managed to winkle out four more batsman.

They got some help from the third umpire to get rid of Kumar (30), who put on 65 with Ashwin (50) for the eighth wicket, after a referred decision that will do little to persuade India to embrace the Decision Review System.

“It’s still pretty decently poised, although they definitely have an ace up,” said Ashwin, despite 288 being the highest successful fourth innings run chase in a test at the ground.

1 Sideline Cut: Vignette shows why Bird is the true shark in The Last Dance
2 O’Leary says himself and Kingdom star Galvin were the best of enemies
3 Seán Óg Ó hAilpín regrets ‘callous’ aftermath of Cork strikes
4 Patience and a local focus: More clubs should be like Athletic Bilbao
5 ‘The diet was ridiculous, so silly’: Sarah Lavin still on track for Tokyo Olympics
Real news has value SUBSCRIBE

Ken Early: Liverpool fans, Bamber Gascoigne and a close shave in Istanbul 06:00
As news gets better, can the pull of The Field be resisted? 06:00
From TB to polio: GAA is no stranger to disease disruptions 05:00
Scottish report casts its net wide to ensure protection of wild salmon 00:00
Seán Óg Ó hAilpín regrets ‘callous’ aftermath of Cork strikes 23:00
Here is your handy guide to sport on television this week