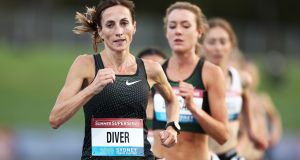 Bushy Park down by the Thames, Tuesday morning, five days before the London Marathon, and Sinead Diver is finishing her last bursting run ahead of Sunday’s race. Now comes the easy part: jogging, sleeping, eating, and the gentle acclimatisation.

All the hard work is done, her motivation complete, and for an Irish woman running for Australia – as Diver is happy and proud to put it – there’s not only one but possibly three target times in mind.

“I’m very excited to race, and a bit nervous of course, as always,” she says. “Training has been going well, a good lead in, and London is one marathon I’ve always wanted to do, given it’s so close to home. It’s my first of the five marathon majors as well, and I want to tick them all off, at some stage.”

By home, Diver will always mean Belmullet, in west Mayo, even if her home for the last 17 years has been Melbourne, Australia. Hence the gentle acclimatisation to London, where her journey from late running convert to one of the leading women marathon runners in the world continues apace on Sunday – and a possible shot at the fastest marathon times ever run by an Irish and/or Australian woman.

Diver is part of the 25-strong elite women’s field for London, and at age 42, also happens to be the oldest: still her 2:25:19 clocked when in winning the Melbourne Marathon last October ranks her 12th best of them, and all going to plan she hopes to improve on that time again.

For Diver, the target is not just improving her best of 2:25:19, but possibly the Australian record of 2:22:36, set by Benita Willis Johnson in 2006, and also the Irish record of 2:22:23, set by Catherina McKiernan in 1998. She’ll only be eligible for the former, but that doesn’t make them both any less tantalising.

“Sunday will be a lot different to Melbourne, which for me was more of a time trial,” she says. “London will definitely be more of a race. It’s an insane field this year, six women who have run sub 2:20, all the top American women, the top British. For me, I’d like to place highly, so it will be more about racing, in a pack. There are two pace groups, and they’re kind of either side of where I fit, so I’ll have to decide which one to go with. It will depend a little on the weather as well.

“Recovery from Melbourne went well, and I was happy with the time, but the weather wasn’t great, the wind really, the heat towards the end. It’s certainly possible, on the perfect day, if everything works, to run close to those times, the Australian and Irish records. But I’m not putting myself under any pressure either.”

By her own birthright, naturally, Diver first qualified to run for Ireland, before moving with her Limerick-born husband Colin to Melbourne in 2002, now also home to their two sons Eddie (9) and Dara (6). After Athletics Ireland tightened the marathon qualifying time for the 2015 World Championships in Berlin (45 seconds faster than Diver’s best), she opted to represent Australia; likewise at the 2017 World Championships in London, which would mean sitting out four years if she wanted to represent Ireland again.

“I do still see myself as an Irish woman representing Australia, even after 17 years in Australia now. I do still feel very Irish, and will feel that again on Sunday. It’s unusual, but that’s the reality, and I’m really proud to be representing both countries in the way that I am.

“The Irish thing is still very much in my heart, it might not say it on paper, but I consider myself lucky to be part of both, and I’m thankful for the support. There’s no negativity around it anymore.

“If I do break the Irish record, I know it won’t count, but it would count for me, definitely. And for my family, and anyone who knows me. My time in Melbourne ranks me the second Irish woman, even if it’s not officially there on the ranking list, I feel like it is.”

Diver will also have plenty of home support in London on Sunday: “Colin and the two boys didn’t come back from Australia, it was just a bit much for them to make the trip, but all the family from Ireland, Mum and Dad, my three sisters, and my brother, they’ll be out on the course on Sunday.”

She credits her improvements over the last year to a switch to a new training group at the Melbourne Track Club, under the guidance of Nic Bideau, Sonia O’Sullivan’s husband, although she still trains in her spare time, away from family and IT work commitments.

“I’ve actually switched roles, upped my hours, 11-5, five days a week, which gives me more time in the mornings and evenings to train, but with two kids as well, training is still all around that.”

A top 10 in London, or a time under 2:29:30, will almost certainly qualify her for the Tokyo Olympics, and after missing out on Rio, even at age 43, that’s a perfectly realistic target.

“The motivation is definitely there, I’m still enjoying it, and have the advantage that I’m only running for less than 10 years, and even though I might be a little older than say the typical athlete, still have so many goals, just to see how fast I can go. If Tokyo is on the horizon, I think a break from work might be on the cards, but it’s definitely a huge ambition, we’ll just have to see how the qualifying works out.”

The Irish woman running for Australia in the Tokyo Olympics. The journey continues.

Owen Doyle: Calamity in Cardiff is hard to get your head around
Here is your handy guide to sport on television this week