Home side cruise past Japan in opening T20 qualifier in Skerries 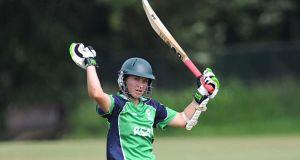 A brilliant 66-ball century from opener Clare Shillington helped Ireland to a landslide 117-run victory over Japan in their opening fixture of the ICC Women’s World Twenty20 global qualifier at Milverton in Skerries this morning.

Shillington took full advantage of some poor fielding from Japan to bat through the innings and finish unbeaten on 114 from 72 balls, hitting 13 fours and two sixes. The 32-year-old from Belfast was dropped an incredible five times during her innings, including twice in one over, and she took full advantage to make her highest international score.

The one catch that Japan did hold was Irish skipper Isobel Joyce, who made five, with twin sister Cecelia joining Shillington in an unbeaten 134-run stand for the second wicket that helped Ireland post a score of 170 for one from their 20 overs.

Cecelia finished on 40 not out from 41 balls, with Shillington’s strike rate of close to 160 showing just how important she is to the Ireland team at the top of the order. She becomes the first women’s international to score two centuries following up her knock against the Netherlands last September.

Just two Japanese players managed to make double figures as they were bowled out for 53, with 15-year-old leg-spinner Elena Tice taking three 10, while there were two wickets each for Melissa Scott-Hayward, Kim Garth and 13-year-old Lucy O’Reilly.

Ireland’s next match sees them take on Canada at Anglesea Road on Thursday morning as they continue their attempt to claim one of the three qualification places for next year’s World Twenty20 in Bangladesh.