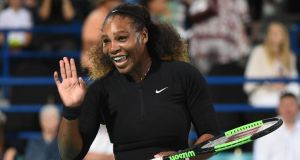 Serena Williams has withdrawn from the Australian Open, which starts on January 15th. Photograph: Tom Dulat/Getty

Serena Williams on Friday joined the galaxy of tennis stars who have withdrawn from the Australian Open, which starts on January 15th.

The American – who won the title last year when seven weeks pregnant – is within one title of passing Margaret Court’s all-time grand slam tally of 24, but felt she was not ready to return to the Tour after a long absence.

Just 24 hours after Andy Murray bowed to the inevitable and pulled out to return to the UK and seek more medical help on his injured right hip, the best player in the women’s game decided her preparations had fallen just short of what she needed to be competitive.

Kei Nishikori also withdrew this week, and there are lingering doubts over Novak Djokovic, Stan Wawrinka and Rafael Nadal.

“After competing in Abu Dhabi I realised that, although I am super close, I’m not where I personally want to be,” Williams said.

“My coach and team always said, ‘only go to tournaments when you are prepared to go all the way’. I can compete – but I don’t want to just compete, I want to do far better than that and to do so, I will need a little more time. Even though I am disappointed about it, I’ve decided not to compete in the Australian Open this year.

“The memory of last year’s Open is one that I will carry with me, and Olympia [her daughter]and I look forward to coming back again. I appreciate the support and understanding of my fans and everyone at the Australian Open.”

The tournament director Craig Tiley, who is nervously waiting on confirmation of a start from Victoria Azarenka, said, “The true champion Serena is has been demonstrated in the herculean efforts she has made over the past few months in her desire to play the Australian Open.

“Serena transcends the sport in the way she approaches all aspects of her life and consistently gives her all in everything she does. It was never going to be good enough for her to just compete, she wants to give herself the best chance to win.

“This is why she has pushed it and pushed it until the eleventh hour to make her final decision.”