Sean Abbott yet to decide on competitive cricket return

NSW chief executive: ‘It’s a matter for him to see what he wants to do so we’ll let him make that decision’ 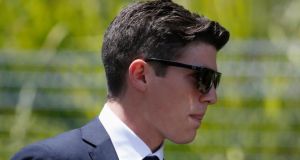 Australian cricketer Sean Abbott arrives at the funeral of Phillip Hughes in Macksville. Abbott was the bowler who delivered the ball which struck Hughes during a first class cricket match on November 25th. Photograph: Jason Reed / Reuters 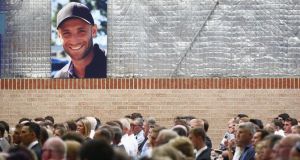 Guests at the funeral service for Phillip Hughes at Macksville High School Stadium in Macksville, Australia. The Australian cricketer passed away, aged 25, as a result of head injuries sustained during the Sheffield Shield match between South Australia and New South Wales at the SCG on November 25th. Photograph: Cameron Spencer - Pool/Getty Images

Sean Abbott alone will decide whether he wants to return to first class cricket at the Sydney Cricket Ground on Tuesday, two weeks after his short-pitched delivery felled Phillip Hughes at the same wicket, according to his state team.

The 22-year-old all-rounder, who made his international debut in October, returned to training with New South Wales on Tuesday and attended Hughes’s funeral the following day.

Abbott has drawn sympathy from the global cricketing community, though some former players and pundits have cast doubts on his ability to play at the highest level again. He opted not to play for his club side, Sydney University, this weekend.

New South Wales chief executive Andrew Jones said it would be Abbott’s call if he wanted to play against Queensland, as it would be for the team-mates who were witness to the injury that led to the Hughes’s death during the Sheffield Shield match against South Australia.

“He’s in the same boat as everybody else,” Jones said in comments published by News Ltd media. “It’s a matter for him to see what he wants to do so we’ll let him make that decision.

The wicket where Hughes was struck will not feature again at the SCG over Australia’s summer of cricket, having been “retired” by groundskeepers.

Trauma experts said the impact of Hughes’s death may not sink in for Abbott for weeks but also said a return to his natural environment of training and competition, surrounded by supportive team-mates, could help him recover quicker from any psychological damage.

Hughes’s grieving team-mates at South Australia, who were also at his funeral in his rural home-town of Macksville, have not yet decided on whether they will play Tasmania in the next round of the Sheffield Shield next week.

Michael Burge, director of the Australian College of Trauma Treatment, said: “I wouldn’t recommend they stay away (from the sport) at all, actually. They just need to be taking into account that they may be a little bit awkward or not quite on their game as they were for a few weeks.

“They should give themselves some self-latitude, some tolerance and compassion to be, perhaps, less than their best.”