Schools make for grounds of a great celebration 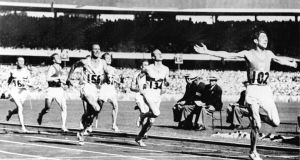 So less than a year now before that big 1916 anniversary special, and we still don’t know exactly how to celebrate it. How does one begin to recognise the significance of an event which impacted on so many of that generation, and so many of those that followed?

What is certain is that the lives of countless young Irish people were forever changed after that brilliant meeting of minds upstairs in Wynne’s Hotel, Dublin, on the night of Monday, April 3rd, 1916. Because there, and through the foresight of great men like HM Finlay, it was agreed to stage the first Irish Schools Athletics Championships.

Almost 100 years later and there’s still so much to be thankful about. Finlay was then honorary secretary of the old Irish Amateur Athletic Association (IAAA), and recognised the need to inspire a new generation of athletes, in part because of the fall off in affiliated clubs after so many young Irish men went off to fight in the first World War. His motion was passed, unanimously, and the inaugural Schools Championships were set for Saturday, May 20th, at Lansdowne Road.

Then that other big 1916 event happened, so the Schools Championships were postponed, “due to the rebellion”, until September 23rd (with the allowance that schoolboys from the previous term could still compete).

There were just 13 events, spilt between senior and junior Boys, and students from Belvedere College won five, including the first Irish schools sprint champion, Patrick J Cunningham. The McOstrich brothers (remember them?), Alexander and Frederick, also won five titles for Cork Grammar School, while the first Irish schools mile champion was JG Moore from Mountjoy School, who clocked a worthy 5:49.0.

By then, just qualifying for the championships was an achievement in itself, as there were also provincial championships, where only the top three in each event progressed to the national stage – with no exceptions (the Ulster Schools Championships didn’t fully assimilate until 1966). In 1956, a farmer’s son from Ardfert, Thomas O’Riordan, won the Munster schoolboy mile, then, against all odds, won the Irish schoolboy title too, in a new record of 4:35.1. He also went on to run in the Olympics, and still traces it all back to winning that Irish schoolboy Mile.

It may or may not come as a surprise that it wasn’t until 1970 before any girls events were added, although it didn’t take them long to make their mark. That year, the speedy Vera Sherry from Monaghan Vocational School won the senior girls 400m, and also won the first senior girls cross country title, which also started in 1970. Later, Sonia O’Sullivan, Catherina McKiernan and Derval O’Rourke all broke through with Irish schools titles.

Although it’s not just the champions who are inspired. Anyone who gets even one foot on the medal podium, or falls one foot short, comes away from the experience a better athlete and I know that because I was one of them. And the next generation keep coming, John Coghlan (son of Eamonn), Timmy Crowe (son of Tim), and Marcus Lawler (son of Patricia Amond), are among the recent schools champions inspired by the titles won by their own father or mother.

Now, with the 2015 Irish Schools Athletics Championships already underway in the four provinces, climaxing in Tullamore on the last Saturday in May, comes the thought of a 1916 anniversary special. Because this is one centenary event that definitely deserves to be celebrated. Just ask any of those inspired by it all in the 100 years since.