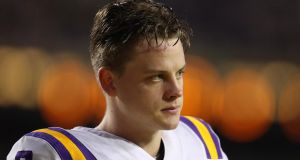 You grow up quickly in American sport. The world is spinning on such a funfair axis at the moment that nobody cared that the NFL draft was conducted from the basement of the comish’s house this week.

In a normal year, the NFL draft is presented as a hurricane of American athletic and commercial triumphalism and every year there is a new star ascendant: the young man who has emerged from his generation to earn the coveted number one pick. It’s an American rite of passage and before you have even played a single minute in the NFL it confers a special status on you, for better or for worse.

It must be a disorienting place to find yourself. Joe Burrow was born in 1996: into the roaring surface optimism of Clinton America. But he came from one of the struggling states. Of the children across the country who went on to play high school football, he is not just one of the 0.08 percent who had made it the National Football League but he stands in splendid isolation as the very first pick, out there and on his own.

He emerged from the Rust Belt – Athens, Ohio – to transform the trajectory of his life over the past 12 months, switching from a reserve quarterback with Ohio State to an unstoppable touchdown machine with Louisiana State University, finishing with 60 touchdowns, an NCAA record, in leading the team to the National Championship.

Naturally, he won the Heisman Trophy and his speech, which already feels a lot longer ago than last December, made everyone sit up because of its somberness and its altruistic streak. Burrow was halting and teary and almost subdued as he stood before a crowded room and television cameras broadcasting his words across the country and tried to piece together the speed-of-light ascent in the most physically punishing ball sport of them all.

It was as though the act of standing there at that podium had given him the chance to be still and think about the where he had emerged from – a maelstrom of basketball and football games in high school, then three hellish years at his home state when he couldn’t earn a starting berth before his dazzling turn of defiance with LSU.

He thanked everyone. He broke down when he mentioned Ed Orgeron, the LSU coach who had the gut instinct to trust him. He bore no bitterness. And then he said something truly unexpected.

“Coming from southeast Ohio, it is a very, very impoverished area. And the poverty rate is almost two times the national average and there are so many people there who don’t have a lot. And I am up here for all those kids in Athens and Athens county who go home to not a lot of food on the table, hungry after school and you guys can be up here too.”

And with those words he pulled everybody watching into the bloodstream of the American Midwest and in touch with the decimation of that region.

A Hampton Institute report, published in 2013, stated that as recently as 2000, Ohio state had one million manufacturing jobs. That had shrunk to 350,000 by 2010. The Rust Belt has been deluged by bleak stats. Franklin County, where Columbus is situated, has a 27 per cent child poverty rate. In Toledo and other cities, the rate of child poverty among black children has exceeded 50 per cent. Dayton, once an absolute furnace of US industry and the cradle of inventions – it has more patents than any other American city – had the highest opioid death rate in the country in 2017.

The first part of Michael Cimino’s The Deer Hunter has the feel of a slow-motion walk through a precise moment in the American immigrant experience, when the furnaces roared and the jobs were secure. It was notionally set in Pennsylvania but it was to Cleveland that the scouts turned for their landmarks: the opening scenes filmed in Central Blast Furnace, the Russian Orthodox Church where Jon Savage gets married in Tremont, the supermarket where Meryl Streep works just up the street and the bar where Christopher Walken goofs it up in Mingo Junction.

The Deer Hunter was released in 1978 and harkened after something apparently lost from the outset. By then things had already begun to turn. A recent data piece in the New York Times, on why American inequality will be exacerbated by the economic ravages of the coronavirus, put it this way. To the basic question of economic advancement – do you earn more than your parents did at your age? – the answer was yes for a whopping 92 percent of Americans born in 1940. But for those born in 1980, that percentage had dropped to 50 per cent. “Living the American dream had become akin to a coin flip,” the piece stated.

And here now was the emblem of the American dream– the quarterback, with all the vitality and cheering behind him – shining a light on the empty refrigerators, the dismal fast-food outlets, the closing factories and the sense of abandonment which Donald Trump so cannily manoeuvred into votes at the last election. Immediately after Burrow’s speech, the contributions to the Food Pantry initiative in his home county of Athens increased by an unprecedented half a million dollars, money which has been crucial in feeding local families during the pandemic.

Already now there is pressure on Burrow to somehow become the statesman for his part of Ohio that LeBron James has been for Akron. His future is far from simple: Burrow was chosen by the Cincinnati Bengals, a perpetually struggling team in one of Ohio’s other fading cities. The hope is that he can reinvigorate the energy in the city in the old trusted, totemic way; through his throwing arm, through the wins, through the half forgotten sense of what it feels like to be winning and vital and blood-rushed again.

You think of the casualty list of other young men conferred – or condemned – with greatness by the NFL draft system and you shudder. You think of Johnny Manziel – the only player to ever win the Heisman in his first college year – in and out of the NFL amid of a blaze of publicity and wrong move, although how could you not crash and burn with such a brilliantly rebellious name?

Or you think of Ryan Leaf, vying with Peyton Manning for the number one draft spot in 1998 and whose NFL career disintegrated and whose name was cheaply recast as a metaphor for failure even though it was, at the end of everything, a man’s name.

The obligation to deliver will be instant and constant for Burrow but that was also true during his college year, where the football experience is even more intensely lived and felt. He’s a young man entering the treacherous dream world of American life in which – when and if the culture returns to normal – he will headline all the Sunday broadcasts and the sports bulletins in the bars and restaurants and where he will become a public face and voice.

There was no doubt that he meant what he said in his message to the children in Athens who might have been watching – “that you can be up here too”. But Joe Burrow knows too well from experience – from being as preternaturally good as he is at the brutal art of throwing a football – that making it to the NFL is like being struck by a random bolt of lightning. By virtue of the fact that he was the Athens child who has made it to this exalted stage, then the percentage chances are that those he was speaking to almost certainly won’t. But his words of hope are the perpetuation of the American dream and, you know: look at him go.

1 Alain Rolland to step down from World Rugby position
2 ‘Jack used to call me his official grasshopper keeper. We had a great time’
3 Georgia and Fiji in line to join Six Nations sides in eight-team tournament
4 Scottish clubs set to crown Celtic as champions
5 US sorry, but not too sorry
Real news has value SUBSCRIBE
Here is your handy guide to sport on television this week