School days over, Tector and Campher looking to make the grade with Ireland 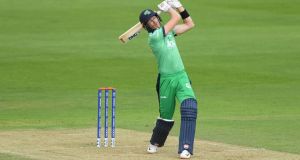 Ireland’s Harry Tector hits a six against the England Lions during the warm-up match at the Ageas Bowl in Southampton. Photograph: Stu Forster/Getty Images for ECB

It’s no surprise to find Harry Tector on the golf course as he prepares to make his one-day international debut against England on Thursday. For the 20-year-old, it is in the blood to take to sports of all sorts. Sure, the summer game of course, but equally top-flight rugby, hurling and Gaelic football – if there’s a game going, the Tectors want in.

But when the right-hander takes the field in the first of three fixtures Andrew Balbirnie’s men will play over the next week he will be doing so as a product of the professional cricket pathway. As a lad, he watched the golden generation propel Irish cricket onto the global stage, blazing that trail in the space of a decade. Now, he’s the poster boy for Generation Next.

Tector has already appeared 20 times in T20s but taking on the world champions in games simulcast around the world is different gravy. But the man often described as a future captain is taking this next step at the ideal time, Ireland’s most consistent player against Afghanistan before lockdown, compiling a pacy half-century against a strong England Lions bowling line-up on Sunday in preparation for this series. By any measure, he looks ready.

The timing of Ireland’s transition is important, with this also the first series in the new ODI Super League. That will see, over the next two years, 13 teams playing off for the seven automatic qualifier positions at the 50-over World Cup in 2023. The man who led the team for 11 years and into Test match status, William Porterfield, remains a member of the squad at age 35 but has handed over the armband, while Kevin O’Brien and Boyd Rankin, of similar vintage, round out the trio of champions who have seen it all. But for Balbirnie’s men to keep striving in the direction of those that came before them, it will depend on this new cohort.

“It’s an exciting time with the young guys coming through,” Tector says, also citing left-arm quick Josh Little and wicketkeeper Lorcan Tucker, part of that younger engine room, all to be on show this week in Southampton, with further games taking place on Saturday and Tuesday. “Hopefully, over the next five years, we can build the guts of a strong team and become a serious force. We want to do that.”

Another newcomer with a chance to make their bow this week is Curtis Campher, albeit one from a very different background to Tector. The 21-year-old is South African, recruited through his grandmother’s Irish nationality.

Coincidentally, the two went to school together when the younger man was on a cricket exchange as a 15-year-old in Johannesburg. “Curtis was a bit of a big dog,” Tector recalls. “I didn’t know he had Irish connections but we kept in touch. Years later, he sent me a text about coming to play and mentioned that he had an Irish connection. I’m delighted to see him in the squad. It’s a mad turn of events.”

Especially so given he wasn’t permitted to leave locked-down South Africa until last month, immediately joining the national training camp ahead of this series. With Balbirnie flagging that it is “more than likely” he will balance his side with a bowling all-rounder, and Campher performing well with bat and ball for the Irish development squad in Namibia in February and then in the squad’s practice game, he appears well placed to be catapulted into the XI.

“To think that could happen is amazing,” Tector says, reflecting on his South African school mate from six years ago. “Hopefully he’s in there and we can make our debut together. It would be fantastic, a good finish to the story!” Or, as Irish cricket fans will hope, just the start.