Irish Open in Cork cancelled, but World Coastal Rowing Championships to go ahead 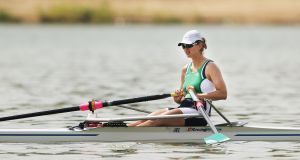 Monika Dukarska: the Killorglin rower is the defending champion in the women’s solo; she will compete in heats in Thonon on Friday, with 20 rowers finding their way to Saturday’s final. Photograph: Cathal Noonan

Two big events involving Irish rowers have had very different fortunes. The Irish Open, scheduled for Saturday and Sunday at the National Rowing Centre in Cork, has been cancelled because of a forecast of crosswinds which could gust up to 40km/h.

In France, the World Coastal Rowing Championships, from Friday through Sunday, will go ahead – but flat, calm conditions on a freshwater lake are hardly the classic scenario for such an event. Winds were picking up a little on Thursday.

Monika Dukarska leads a big Ireland team at Thonon on Lake Geneva. The Killorglin rower is the defending champion in the women’s solo; she will compete in heats on Friday, with 20 rowers finding their way to Saturday’s final.

“The course here is tricky, though the water is calm,” Dukarska told The Irish Times. The Killorglin woman, an accomplished Olympic-class rower, joked: “We brought the wrong boat.”

The Ireland entry consists of 45 rowers from clubs as far apart as Arklow in Co Wicklow (they have eight crews), Galley Flash in west Cork and Cairndhu in Antrim.

The Irish Open, which was postponed from last week, was to be the opening event in trialling for the 2018 season. Claire Lambe, who has recently taken up her new job in Cork, missed the deadline for entry for the Irish Open but will be available for selection. Sinéad Lynch may also return, though she has not yet locked in that decision.

The High Performance Strategy for 2018 was published this week. It is generally very clear. The primary priority is the Olympic Games and the boats which can bring Ireland success there. While the lightweight men’s pair is not mentioned as a priority boat, Ireland’s high performance director, Antonio Maurogiovanni, told The Irish Times that this does not mean the boat will not be part of the team, especially as we are world champions and might defend the title. “It is quite early for this question to be asked,” he said.

The Dublin Sculling Ladder time trial takes place this Saturday, October 14th, at Islandbridge. Also set for Saturday is the Portadown Marascull, over a 16km course on the River Bann.

Jack Dorney of Shandon and Margaret Cremen of Lee topped the men’s and women’s rankings at the Cork Sculling Time Trial at the Marina last weekend.

The Dublin Head of the River, which was set to be held on November 18th, has been cancelled. The race was fixed for the day after the UCD Centenary Dinner, and it was thought wiser to not hold it. Four UCD women’s rowers, including Daisy Callanan from the Championship-winning senior eight, have moved to Commercial.

Windy weather or not, Damian Browne is hoping to get out on the water a lot in the next week, as he prepares for the Atlantic Challenge ocean race. The former Connacht rugby player’s solo boat is due to be shipped to the Canaries on Saturday, October 21st. The race is set to start on December 12th.