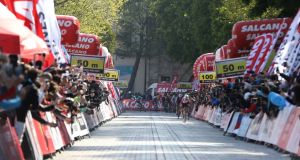 Cyclists at the finish point at Sultanahmet Square in final Sakarya-Istanbul stage of the Tour of Turkey in Istanbul. Photograph: Getty Images

Sam Bennett sealed victory in the points classification in the Presidential Tour of Turkey on Sunday, netting a fine third on the final stage, and finishing far ahead of his closest rivals in that competition.

Bennett had won the Istanbul stage with a daring solo move last year and tried the same tactic again. He blasted clear of the peloton with more than a kilometre to go and got a gap, but hard chasing by the Deceuninck-Quick Step kept him within reach.

The Australian Caleb Ewan (Lotto Soudal) then jumped up to Bennett and went by, winning the stage. Bennett had run out of steam and was also passed by Fabio Jakobsen (Deceuninck-Quick Step), but held on to take third. Given the strength of his ride, though, he will wonder if he would have won the stage had he bided his time and waited for the sprint.

The Carrick-on-Suir rider will nevertheless be satisfied with his week. He won stages one and two, led overall until Saturday’s toughest stage and also dominated the points classification for the second straight year. He finished with 70 points, far ahead of Ewan’s 56 points.

And, given that he was returning after a near month-long break from competition and had said before the race that he was lacking form, his performances bode very well for upcoming events.