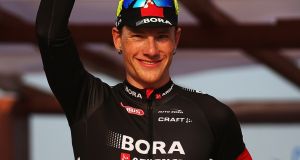 Ireland’s Sam Bennett blasted home to win the Paris-Bourges on Thursday and notch up his fifth win of the season.

The 24-year-old sprinter was frustrated in last Saturday’s Munsterland Giro, being hemmed in at the finish, but he and his Bora-Argon 18 team had no such problems in the finale of the latest race.

His team-mates put Bennett into the perfect position and he outsprinted the other riders to take victory, beating Frenchman Nacer Bouhanni (Cofidis), Italy’s Giacomo Nizzolo (Trek Factory Racing) plus the rest of the bunch to the line.

Bouhanni and Nizzolo won the points classification in the Giro d’Italia in 2014 and 2015 respectively.

“Coming into the finale it was pretty dangerous but the guys kept me in a good position in the last 10 kilometres,” said Bennett.

“Then, before the one kilometre to go banner, Shane [Archbold, his lead-out man] took over. From that point, he was on the front with me on his wheel. I thought it was too early but obviously he just had massive, massive power. He brought me till 250 meters. He did over one kilometre in front!

“And then I was able to accelerate from his wheel. It was a long sprint but it was great. I just want to thank the team for the massive support.”

Bennett’s win is his second since the Tour de France, and his fifth of the season. He started that run with success on the final stage of the Tour of Qatar in February, then followed it up with two stages in May’s Bayern Rundfarht.

Illness hampered his Tour de France preparation and another bout of sickness put him out of that race, but by taking stage four of the Arctic Race of Norway plus Paris-Bourges, he has shown that he has rebounded well from that illness plus completing 16 stages in July.

At the time both he and his team manager Ralph Denk said that riding the bulk of the Tour should make him a stronger rider for the future. All indications are that this is already the case.

Bennett and his team will try to secure one more victory before the end of the season. They will line out in the Paris-Tours race on Sunday, where he will once again go head to head with the other sprinters in search of success.

“Paris-Tours might be different, and longer for sure, but the win today definitely boosts the confidence,” he said. “I didn’t really know how my legs were. But I could accelerate hard and hold it. The legs are good. So hopefully we can do something on Sunday.”

Longer term, he will aim to return to the Tour in 2016 and take a stage win there. Seán Kelly has said that he believes Bennett has the speed and ability to aim for such a result in the race. He will also aim for the 2016 world road race championships in Qatar.

1 Ireland to stick with winning formula against England
2 Wales cry foul over Furlong’s scrum technique
3 No happy returns as Atlético hold Liverpool at bay in Madrid
4 On healing and wild hurling: The re-education of Diarmuid Lyng
5 Gerry Thornley: England primed to show their best against Ireland
Real news has value SUBSCRIBE