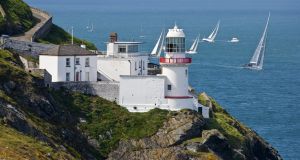 A reception for the SSE Renewables Round Ireland Race was cancelled but the race is still planned to start on Saturday June 20th. Photograph: David Branigan/Oceansport

Although not a sport known for large crowds of spectators, the spread of the coronavirus has this week led to cancellations and postponements in high-profile Sailing events.

Last week’s move by the Italian government to place movement restrictions around the outbreak region of Lombardy made the viability of the World Cup of Sailing Olympic classes regatta in neighbouring Genoa highly doubtful.

Within 24 hours of the nationwide travel-ban in Italy on Monday, World Sailing announced the cancellation of the championship thus throwing into disarray the prospects for the final nation places for this Summer’s Tokyo Olympic Games for African, Asian and European countries.

Ireland is hoping to qualify athletes in the Men’s single-handed Laser Standard and 49er skiff events. Rescheduling will be examined but it is unclear when, where or how this might take place with such uncertainty of the spread of the virus.

The event was also to be the final selection trial event for the women’s single-handed Laser Radial event in which Ireland has qualified for Tokyo. The second trial event was scheduled to be at the Princess Sofia regatta in Palma a fortnight from now. However, on the direction of the national and Balearian governments, the organisers on Thursday announced that the event is now cancelled for 2020.

Irish sailing’s elite athletes had switched their training camp from Genoa to Mallorca but are now expected to return to the performance headquarters facility in Dun Laoghaire to continue sailing on Dublin Bay instead.

While the sailing events are held in open-air and are generally non-contact, it is the risk ashore in gatherings as well as in shared facilities such as gyms and hotels where transmission of the virus might occur.

For recreational sailing where social gatherings are an important aspect of the sport, the impact of the virus is already being felt from initiatives taken by organisers.

The launch this week of the SSE Renewables Round Ireland Race by Wicklow Sailing Club and hosted by the Royal Irish Yacht Club in Dun Laoghaire had been expected to attract over 100 people to a reception and briefing for several hours.

The gathering was cancelled but the announcement was made that the race is still planned to start on Saturday 20th June.

Several other early-season regattas with significant social contact risks are also known to have been rescheduled with announcements expected in the coming week or sooner in light of the announcement by the Irish Government to move into the delay phase of the pandemic response.

Next week’s Irish Sailing annual conference and awards in Dun Laoghaire at which several hundred guests from around Ireland were expected has also been cancelled with a virtual ceremony planned to announce the recipients including the ‘Sailor of the Year’ award for 2019.

The Race Event Management and Support Conference will be rescheduled for the autumn or early 2021. As a result, the qualifications of those race officials who require revalidation this year will automatically be renewed.

The club symposium and training conference have been cancelled with a webinar planned to replace training for the Checkclick system.

“We are fortunate in sailing that we are a sport that takes part in outdoor spaces on the water, where there is no contact between competitors and there are no spectators or crowds to consider,” according to CEO Harry Hermon on the Irish Sailing website.

“For this reason, the risk of infection while participating in sailing activities is minimal. It will be up to competitors to decide whether they participate.

“We will however need to consider how we organise race management and activities ashore during events (social events, briefings, changing, prizegivings etc).”

Individual event organisers are being asked to follow this lead in their own decision-making as they see fit.

1 Cheltenham faces criticism after racegoers suffer Covid-19 symptoms
2 Andrew Conway diary: In search of a competitive edge
3 America at Large: On Long Island, longing for a return to our field of dreams
4 Health official says decision to hold Liverpool-Atlético game was wrong
5 ‘Every team is in the same position – we all just want to play games’
Real news has value SUBSCRIBE