Biggest ever line-up ready for action at Irish Championships Regatta 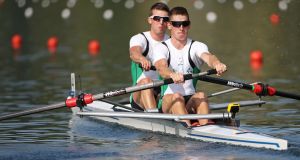 Mark O’Donovan and Shane O’Driscoll will be in action for Skibbereen at the Irish Championships Regatta. Photograph: by Philipp Schmidli/Getty Images)

Ireland crews have won more than one medal at every major international regatta this year. Back home, participation at regattas has jumped 20 per cent. The two come together this weekend in the biggest ever Irish Championships Regatta.

Spectators who hove up at the National Rowing Centre will get the chance to see a Skibbereen ‘super four’ of Paul and Gary O’Donovan, Shane O’Driscoll and Mark O’Donovan –winners of three gold medals, two silvers and a bronze on their sweep through Europe this season.

The four form half the rowers in a Skibbereen eight which must be favoured to dethrone Commercial come Sunday evening. And even with heavyweight opponents, Paul O’Donovan should win the senior single on Friday evening.

The presence of the high-achieving Skibbereen internationals has shrivelled some entries: there are just eight crews in total in the men’s senior quadruple, double and pair. With a prize only for the winner, club rowers have concentrated their efforts elsewhere.

The entry in the grades below senior is remarkable, with 42 men’s club two single scullers and 22 crews in the club coxed fours (that is 110 competitors). Below this level again are hundreds of underage contests which are part of the regatta, though they are non-Championship events. The organisers say they will review these depending on the weather each day.

The women’s events have some of the most anticipated races.

The defending champions in the senior eight, UCC/Skibbereen, had an excellent win at Cork Regatta, but the crew they barely beat there, NUIG, has now combined with Cork to form a strong composite.

In terms of personnel, the UCD/Old Collegians eight looks strongest, as Olympians Sanita Puspure and Claire Lambe come on board. St Michael’s have their own Olympian in Sinéad Lynch, while Leonora Kennedy also has international experience. Commercial look strong right through the boat. This could go a lot of ways. The prospect of UCD/OC fighting it out with Skibbereen/UCC in a race to the line is an enticing prospect.

In the senior single on Saturday, Puspure and Monika Dukarska resume a battle which they carried on at World Cup regattas in Poznan and Lucerne, with Puspure coming out on top both times.

Dukarska’s second consecutive top-12 finish in a World Cup has secured her for funding for the season ahead. However, she says she will not return to the system unless she sees real chance of progress and success.

Sean Casey, the Ireland heavyweight coach, said in Lucerne that he hopes that Dukarska will rejoin the programme and says there may be a crew to be built from seniors who are in the system alongside under-23 athletes.

The World Under-23 Championships start on Thursday (July 20th) in Plovdiv, Bulgaria. Three Ireland crews will compete: the lightweight double of Fintan and Jake McCarthy, the lightweight quadruple of Niall Beggan, Stephen O’Connor, Andrew Goff and Shane O’Connell and the lightweight pair of David O’Malley and Shane Mulvaney. All are good crews and the pair finished fourth last year. Ireland has real hopes of taking medals.