Irish rowers on a gold rush at the Lagoa Stadium 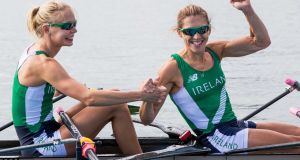 Ireland’s Claire Lambe and Sinead Lynch are going for gold in Rio.

After a round of level par 71 yesterday, Seamus Power kicks off the Irish action today alongside SSP Chawrasia and Lin Weng-tang. Just over 40 minutes later Pádraig Harrington will hope to improve on his round of one under when he tees off at 1.36pm. Harrington will be alongside Danny Lee and Matteo Manassero. 2.0pm - Equestrian

After making a successful Olympic bow yesterday that saw her qualify through round one of the individual dressage, Judy Reynolds will hope to finish in the top 18 of the second stage to make it through to Monday’s final.

Scott Evans begins his third Olympic campaign, hoping to progress further than a disappointing first round exit in London four years ago. He takes on Marc Zwiebler of Germany in his opening Group K game. Almost 12 hours later at 01.05 Chloe Magee will hope to improve on her loss yesterday by beating Karin Schnaase in her second Group P match.

Ireland’s first serious medal chance could end up resulting in double success as both men’s and women’s crews go in the lightweight double sculls. Sinead Lynch and Claire Lambe take to the water first at 2.32 in their final before Gary and Paul O’Donavan go at 2.42. The Skibbereen brothers came third in their sem-final but their time clocked would have won any of the other semi-final races. They have a real chance of a medal. At 5.10pm, Sanita Puspure will go in the C/D semi-final as she hopes to book her place in the C final.

The track and field eventually gets underway in the Olympic Stadium with Mark English the first Irish athlete up. He goes in heat six of the men’s 800m just before 3pm. At 4.30pm Alex Wright takes part in the men’s 20km walk.

There will be a number of Irish sailors in the water with Ryan Seaton and Matt McGovern beginning their 49er campaign in the men’s race while Andrea Brewster and Saskia Tidey do the same in the women’s 49er FX. At 5.15pm Annalise Murphy will be looking to maintain her gold medal position in the laser radial with races seven and eight taking place. The men’s laser is at the same stage with Finn Lynch in 24th position.

Ireland take on Argentina in their final pool match knowing that nothing less than a win will see them advance to the quarter-finals. The team come in off the back of a 4-2 win over Canada while opponents Argentina only need a draw to go through after a thrilling 4-4 draw with Germany yesterday.

Portaferry runner Ciara Mageean comes into this Olympic Games with high hopes after winning bronze in the 1,500m at the European Championships in Amsterdam earlier this year. She goes in the heats at that distance shortly after midnight.

1 Gerry Thornley: England primed to show their best against Ireland
2 Should fans be allowed drink in the stand at sporting events?
3 Mako Vunipola to miss Ireland game for family reasons
4 Man City’s Abu Dhabi owners not the sort to back down over ban
5 Stopping Jonny May’s pace must be high in Ireland’s priorities
Real news has value SUBSCRIBE

Son Heung-min out for several weeks with broken arm 12:48
Mako Vunipola to miss Ireland game for family reasons 12:51
Man City’s Abu Dhabi owners not the sort to back down over ban 10:51
Pints and sports events; England ready to show their best 07:30
Frank Lampard says Harry Maguire should have been sent off 06:36
Here is your handy guide to sport on television this week