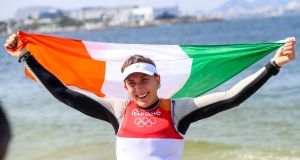 Annalise Murphy proved she can master all conditions as she sailed to an Olympic silver medal in Rio. Photograph: Inpho/James Crombie

Easily Ireland’s most famous sailor after Saint Brendan the Navigator, Annalise Murphy shares a thing or two with the ancient mariner, not least a tough eight-year voyage.

But on Tuesday that journey brought her - and the tiny sport of Irish sailing - to the promised land when she ended a 36-year medal drought with Olympic Silver won in spectacular fashion.

26-year-old Murphy became a household name after she plotted her Olympic course off Weymouth four years ago. Murphy was a strong contender for the gold medal at her debut Olympiad but was overtaken on the final leg and finished fourth.

“I’m only 22. All the other girls are older than me. I’m going to work so hard for Rio 2016 and hopefully I’ll be ready then,” she said in a tearful RTÉ interview in the wake of that performance.

Little did she know how prophetic those words might be. Four years later, with more than a little sense of déjà vu, a determined and hard-working Murphy produced one of the stand-out performances of the entire 2016 regatta, and settled some old scores to boot.

It was made all the more significant because her string of consistent results was achieved in a variety of conditions, the hallmark of a great sailor. The medal race itself,was a sailing master class by the Dubliner in some decidedly fickle conditions under Sugerloaf mountain.

Until the Rathfarnham native arrived on the Olympic circuit some eight years ago, Irish sailing teams had been aiming for an eighth-place finish at consecutive games. If that seems like an act of underachievement, it’s worth noting Murphy has been the only one to do it since Ireland won silver in 1980, a year when - and it’s not popular to point this out - 62 countries decided to boycott the games.

To underline Murphy’s consistent showing, it’s also worth noting how many of Rio’s pace-setting campaigners have ended up on the rocks. London 2012 gold medallist Lijia Xu of China crashed out in 18th place. The much dreamed about husband-and-wife double for local Gintare Scheidt, sailing for Lithuania, and five-time Brazilian medallist Robert Scheidt in the men’s Laser class, never materialised.

As the big names fell, a composed Murphy was conducting her own regatta in a quiet and unassuming manner. Never being out of the top three in her 36-boat fleet all week, in media interviews she played down her own chances. She claimed to be “happy with progress”, was taking things “day by day” and was focussing on “enjoying” the Olympic experience. It belied the depth of her ambition. She was in Rio to medal and had taken all necessary steps to achieve it.

Murphy spent more than 100 days over the last four years on site, learning the different courses that she could possibly race on Guanabara Bay. According to coach Rory Fitzpatrick, who she credits for her success, Murphy’s focus had been on the strategically best way to sail the race track, and the fastest technique to sail the boat given the sea states on the different courses. She had done the homework, she had the boat speed, so despite the bad press about the unsuitability of the venue, she had every reason to feel confident.

Last night, her home club, the National Yacht Club at Dun Laoghaire, erected a big screen in its outdoor boat park to accommodate the large numbers of members who gathered to pay homage on Irish sailing’s biggest night. Many present know Murphy since her junior sailing days and are acutely aware the solo sailor left no stone unturned for Rio, transforming herself from heavy weather ace to all-round contender.

The transformation is clear in her physical appearance, as well. Sailors weights can be closely guarded secrets, but in the six weeks before the games, Murphy is said to have shed as much as seven kilograms to give herself the greatest chances in Rio’s predicted fickle light airs. There was some irony, therefore, that when she swept to the top of the fleet last Wednesday, she did so in a near-gale.

The change in her physique was another sacrifice for an athlete already in peak condition but who wanted to give herself every possible chance. And it may well have been a game changer, because it followed a disappointing fallow period in early 2016 where she struggled with her international results.

Perhaps it was the leather medal weighing heavily around her neck, or just the monotony of an eight-year campaign where she had given up her science degree course at UCD in favour of full-time sailing. To borrow a song title from her favourite band, U2, it looked very much like she still hadn’t found what she was looking for.

In May, Murphy dismissed the challenge of Aoife Hopkins in the three-event Irish trial for the single Irish Olympic spot, but her performances appeared to contradict her own belief, stated publicly, that she was one of eight in the fleet with the potential to win a medal in Rio.

Since January, her results at major events were 48th at Miami World Cup, 30th at the Laser Europeans, 39th at the Laser Worlds and 34th at Weymouth World Cup. It wasn’t exactly a runway for a Rio takeoff, and worse still, the historical profile of the venue’s light winds even suggested that Murphy would struggle to make the medal race.

But such analysis ignores Murphy’s unswerving desire for performance. Even when she takes a break from her Laser, she is invariably back on the water tuning her foiling Moth dinghy or racing with her mother in a 100-year-old Water Wag. As the saying goes, she’s got salt water running through her veins.

The Laser is the biggest fleet of all the Olympic sailing classes and the only one to be raced domestically here. The Irish national championships, of which Murphy is a multiple champion, begins this Thursday in Galway Bay, and were it not for the fact she is now celebrating 9,000 kilometres away, she’d most likely be racing in Rinville.

The little girl who first set sail on Blessington Lake in Co Wicklow with her mum and dad aged five has been imbued with competitive sailing from a very early age. It helped, no doubt, that her mother Cathy MacAleavey was a 1988 Olympian in the 470 class, and her father Con Murphy is a race officer and former National YC Commodore (incidentally, he’s on the water in Rio himself this week, officiating on another course).

But even a glance at the silver medallist’s sailing CV shows she has produced the results, at junior, senior and international level. With roots in the Optimist dinghy class, she progressed quickly to the Laser Radial and, aged 19, won an Under 21-world title in Japan.

In 2013, she bounced back from defeat in Weymouth by winning gold at the European Championships. It was a sensational achievement on her home waters of Dublin Bay and until last night was her career highlight.

And just before Rio there were signs of another bounce, too.

Superficially, it might be argued that at one time this Irish champion was only a heavy-weather sailor. But that simply is not the story here. Instead, in true Olympic spirit, hers is a story about how talent, hard work and commitment pays off.

As recently as this month, in a little reported victory, Murphy scored what turns out to have been a symbolic win at Rio de Janeiro’s International Sailing Week. It was her last race on Olympic waters before the games and few knew it would presage so much.

Just like St Brendan’s famous voyage in search of Hy Brasil, Annalise Murphy’s Rio medal quest has been a determined journey in self-belief that ended last night in silver success.