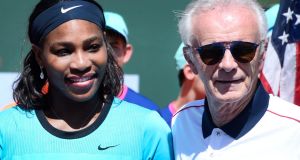 Martina Navratilova says she would not be surprised if women players boycotted Indian Wells following the sexism row which has engulfed the tournament.

Speaking ahead of the BNP Paribas final between Victoria Azarenka and Serena Williams, Indian Wells chief executive Raymond Moore said the Women’s Tennis Association (WTA) was a “lucky organisation” which “rides on the coat-tails” of the men.

He also said: “If I was a lady player, I’d go down every night on my knees and thank God that Roger Federer and Rafa Nadal were born, because they have carried this sport.”

Moore has since apologised for his remarks, calling them “extremely erroneous” and “in poor taste” but nine-time Wimbledon champion Navratilova claims women may not want to play at the tournament while he stays in charge.

“It was really disheartening to see Ray Moore offer the extremely prejudiced and very old-fashioned statements regarding women tennis players,” she said.

“It would be hard to imagine any women to want to go and play at Indian Wells if Moore stays as the tournament director.”

Navratilova was also disappointed by comments from world number one Novak Djokovic, who said in the aftermath of the row that he believes men should be awarded more prize money than women.

Speaking after his straight-sets win over Milos Raonic in the men’s final, the Serb said women deserve the money they get, but men should fight for more because their game attracts more viewers.

He said: “Obviously it’s a very delicate situation. Women deserve respect and admiration for what they are doing. You know, equal prize money was the main subject of the tennis world in the last seven, eight years. I have been through that process as well so I understand how much power and energy WTA and all the advocates for equal prize money have invested in order to reach that.

“I applaud them for that, I honestly do. They fought for what they deserve and they got it. On the other hand I think that our men’s tennis world, ATP world, should fight for more because the stats are showing that we have much more spectators on the men’s tennis matches.”

But Navratilova added: “And Novak Djokovic, as much as I love him, clearly doesn’t understand why, when women and men play in combined tournaments, they must be paid equally. I thought we settled that issue years ago.”

There has been equal prize money in all four majors – the Australian Open, US Open, French Open and Wimbledon – since 2007, as well as at combined Masters events, such as Indian Wells and Miami.