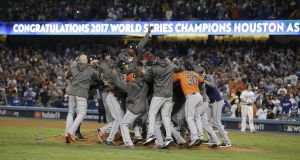 The Astros took a five-run lead in the first two innings, then repelled the Los Angeles Dodgers for a 5-1 victory in Wednesday night’s Game 7 at Dodger Stadium. Houston’s win was the most one-sided of the World Series. Five previous games were decided by two runs or fewer, and two went into extra innings.

The Dodgers entered the series with 104 regular-season wins, the most in the major leagues this year and one fewer than the club record set in 1953, when the team was based in Brooklyn.

“When you put everything, every ounce of your being, into something and you come up short, it hurts,” Los Angeles manager Dave Roberts said. “But I expect us to be in the same position next year. I believe in our guys. I like our guys. I think they’ll be hungrier.”

The victory ends a rebuilding process that began after the Astros lost 106 games in 2011. Using analytics developed by a former Nasa researcher, the Astros nurtured their own talent while losing 310 games over the next three seasons. But in 2015, the Astros compiled a winning record for the first time in seven years and made the playoffs for the first time in a decade. This year, Houston won 42 of their first 58 games and finished with the American League’s second-best record.

“Playing against them, you saw the athleticism, the speed, the power, all of the dynamics,” said catcher Brian McCann, who joined the Astros last November in a trade from the New York Yankees. “But when you get behind the scenes and see what these guys are like off the field, you see what their work ethic is. They want to be great.”

The win also comes two months after Hurricane Harvey devastated Houston. The Astros wore circular blue patches featuring the team emblem, a silhouette of the state of Texas and the word “strong” in capital letters. “It definitely has driven us,” McCann said. “When it was all going, we were on the road and people’s families were back here. You saw the stories. People lost everything during that thing. When we got back home, a lot of us donated our time and got to meet and shake some hands. You see people that lost a lot.”

Springer received the Willie Mays Award as the series’ most valuable player. Springer set a World Series record with 29 total bases and eight extra-base hits, tied another with five home runs and became the first player in series history with extra-base hits in six successive games.

Springer hit a double and a home run, drove in two runs and scored twice to lead the Astros’ offense Wednesday night. Marwin Gonzalez added another run and two more hits, one of them being a double. Right-hander Charlie Morton earned the win in relief. Morton retired the final 11 Dodgers he faced, collected four strikeouts and permitted just one run, one walk and two hits in four innings while throwing a fastball that reached 99mph.

The Astros took a 2-0 lead in the top of the first inning by combining a hit, a fielder’s choice, a stolen base, an error and a groundout against right-hander Yu Darvish. They then expanded their advantage to 5-0 by chasing Darvish in the top of the second. Springer propelled Darvish’s 95 mph fastball 438 feet into the center-field stands for a two-run home run. Springer thus matched the series record set by the New York Yankees’ Reggie Jackson in 1977 and tied by Chase Utley when he played for the Philadelphia Phillies in 2009.

“I remember swinging and hearing the sound of the bat,” Springer said. “I knew it was a good sound. Then I saw the fight of the ball. That’s a crazy feeling, a very surreal feeling. This is what you dream of as a kid. For that to happen is incredible.”

Darvish lasted just one and two third innings, threw 47 pitches and allowed four earned runs on three hits and a walk in taking the loss. Brandon Morrow relieved Darvish, struck out the only batter he faced and became only the second pitcher to appear in every contest of a seven-game series. The Oakland Athletics’ Darold Knowles was the first in 1973.

Los Angeles did not score until the sixth, when pinch-hitter Andre Ethier drove Pederson home with a single. The Dodgers left 10 runners on base, a dismal total.

There was just one more moment to cap a perfect ending to a thrilling World Series for the Astros: Carlos Correa proposed to his girlfriend, Daniella Rodriguez, at the end of the game. She, of course, said yes.