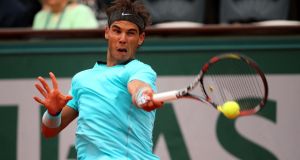 Rafael Nadal of Spain returns a shot in his men’s singles match against Dusan Lajovic of Serbia at the French Open in Paris. Photograph: Clive Brunskill/Getty Images

Eight-times champion and world No 1 Nadal improved his Roland Garros win-loss record to a remarkable 63-1 to advance having not dropped a set in Paris this year.

World No 83 Lajovic, who had not previously lost a set on his French Open debut, quickly went 5-0 down and never recovered, also losing the first four games of the second set to love.

“I think he played a great tournament,” Nadal said of his 23-year-old opponent,

“First time on this court (Philippe Chatrier) is never easy, the court is so big. I’m happy with the way I played today, I was able to control the points from the baseline, which is important for me.

“I look forward to playing against David (Ferrer), it is going to be a very difficult match,” added Nadal, who ended the masterclass on his first match point with a thumping forehand down the line.

Ferrer dominated baseline rallies with the 19th seed in the first two sets before they exchanged breaks in the third and Anderson worked the angles better, sending Ferrer scampering and sliding and taking the tiebreak when the 32-year-old put a forehand into the net.

Ferrer fought straight back in the fourth, unleashing a string of forehand winners to break Anderson in the second and fourth games to win the match.

Ferrer is one of three players who have beaten Nadal on his favoured clay this season, prevailing in straight sets in the quarter-finals of the Monte Carlo Masters in April.

It was Ferrer’s second victory on the slow surface against Nadal, 10 years after the first one in Stuttgart in their first encounter.

With pop star Prince watching from the stands, Nadal played his part of King of the Clay almost to perfection, a few unusual unforced errors the exception in an otherwise extremely solid game.

Lajovic, the man who lost an Australian Open qualifier two years ago after blowing a 6-2 5-0 40-0 lead, surrendered all hope after just a few games.

Nadal, who turns 28 on Tuesday, powered to a 5-0 lead, allowing his opponent only five points before slowing down a bit, only for the Spaniard to step up another gear at the beginning of the second set.

A series of winners – most of them forehands – combined with Lajovic’s catalogue of unforced errors, left the Serbian staring at a possible bagel.

His fine backhand helped him avoid the humiliation and even gave him a break late in the third set, but Nadal, who did not seem troubled by his back pains, had already turned his mind towards Wednesday’s quarter-final against Ferrer.

Both players completed their delayed third round matches on Sunday and while neither appeared to hit top gear on Monday, Murray showed enough speed and touch, particularly in the closing games of the second set, to send the 24th seed home.

Verdasco’s foul-mouthed blast at the umpire over a contested line call, that in the end Murray conceded, had fired up the Spaniard to break in the third set and peg back the Scot but the seventh seed regrouped to prevail.

Asked if it was his best performance of the tournament, Murray said courtside: “I think so. (It was an) unbelievable atmosphere today, I really enjoyed myself on the court. We played some great points and he fought extremely hard in the third set.”

Murray, still without a coach since splitting with Ivan Lendl in March, will play French showman Gael Monfils for the chance to reach the semi-finals at the clay Grand Slam for the first time since 2011.

Battling Italian 10th seed Sara Errani survived an 81 minute first set to reach the quarter-finals with a 7-6(5) 6-2 win against Jelena Jankovic, the sixth seed from Serbia.

Jankovic was visibly wincing in the chair during repeated visits from the trainer who strapped and massaged her right thigh during the changes of ends, but had seemed rejuvenated as the pair went toe-to-toe in rallies lasting more than 20 shots.

She clawed back Errani’s tiebreak lead before losing the set with a return to the net, giving Errani the momentum to take the second.

The Italian, who plays Germany’s 28th seeded Andrea Petkovic for a place in the last four, bellowed with each ball she struck and let out a mighty victory roar on Suzanne Lenglen court.

Stephens made too many unforced errors as Halep, the fourth seed, won through to set up a clash with either 27th seeded former champion Svetlana Kuznetsova of Russia or Czech 23rd seed Lucie Safarova.

With Romanian tennis great Ilie Nastase watching from the stands, Halep worked the angles to unsettle Stephens, who struggled behind her serve throughout.

Halep, who made her only previous Grand Slam quarter-final appearance at this year’s Australian Open, prevailed on the first match point when Stephens, the last American in the women’s singles, sent a forehand long.