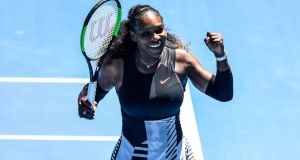 Serena Williams remained on course for her 23rd grand slam title by quelling the challenge of in-form Briton Johanna Konta 6-2 6-3 to reach the semi-finals of the Australian Open for the eighth time on Wednesday.

The 35-year-old American served up 10 aces and thumped 25 winners over 75 minutes on Rod Laver Arena to join sister Venus in the last four, where she will play Croatian Mirjana Lucic-Baroni.

Ninth seed Konta, who reached the semi-finals here last year and won the Sydney warm-up tournament, managed a single break in the second set but was unable to cope with the power of the world number two.

Williams succeeded in finding the target on fewer than half of her first serves but cleaned up the points on 88 per cent of the occasions when she did.

Furious with herself at times because of her inaccuracy, Williams channelled the anger to overcome 25-year-old Konta and reach her 34th grand slam semi-final without having given up a set in five matches.

“I missed a lot today, I got a little frustrated, then I told myself ‘Serena, stop complaining don’t be a Baby-rena out on court there’,” she said.

She started the match reasonably slowly, feeling out an unfamiliar opponent desperate to force her out wide to the wings of the court.

Williams saved a break point to hold on her second service game and pounced to go 3-1 up when the Briton dumped a backhand into the net after a long rally.

Another Konta error, a forehand long, gave Williams the set and the American was immediately applying pressure on her opponent’s serve at the start of the second.

Konta rallied from 0-40 to hold, however, and then broke Williams to go 2-1 up when the six-times champion overcooked a crosscourt forehand.

The pressure on Konta’s serve was unrelenting by this stage, though, and Williams raced around the court like a teenager to break back before a sizzling backhand winner gave her the chance to serve for the match.

Williams said she was delighted to be facing 34-year-old Lucic-Baroni, some 18 years after their only two previous meetings in 1998.

“We played over a decade ago, nearly two decades ago. She’s been playing two decades. No matter what happens, someone 34 or older will be in the final, so that’s great.”

Her march to the last four has been powered by the sheer grit and determination the world number 79 has built up over years of struggle both on and off the court, leaving her forced to start from the bottom when she returned to the game in 2008.

After a promising start to her career that saw her reach the main draw of the US Open at the age of 15 and the semi-finals at Wimbledon in 1999, personal troubles, including alleged abuse from her father, sent her into a tailspin.

“I know this means a lot to every player to reach the semi-finals. But to me this is overwhelming, I will never, never forget this day and this last couple of weeks,” she said, fighting back the tears.

“This has truly made my life and everything that happened okay.

“The fact I was this strong and could fight this hard is incredible. I kind of want to be known as amazing fighter, a person who persevered against everything, against all odds. And that’s what I take pride in.”

The 34-year-old did indeed show plenty of perseverance as she navigated her way through three sets against fifth seed Karolina Pliskova, looking every bit the battle-hardened warrior with her left leg bandaged in two places.

In what was far from a clean victory, the German-born right-hander lost seven service games and took an injury time out halfway through the third set, shattering Pliskova’s momentum just as her opponent had gained an upper hand.

When Pliskova netted a forehand to signal the end of the contest, the Croatian clenched her fists, sank to her knees and sobbed.

“I can’t believe this, this is crazy,” she said.

Lucic-Baroni is well aware that the next fight will be the toughest of her tennis career when she lines up opposite six-times Australian Open champion Serena Williams on Thursday for a place in the final.

“She’s a great champion,” Lucic-Baroni added. “I’m still in the tournament, and I want to remain kind of calm and focused and give another really good performance tomorrow.”