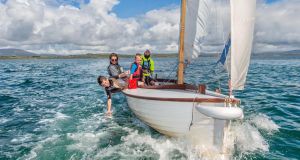 Kevin McCormack, who runs the Heir Island Sailing School in West Cork, with some of his young students. Photograph: Michael Mac Sweeney/Provision

Keeping young people involved in sport into adulthood is a perennial issue and a topic that generates plenty of conversation in Ireland’s sailing clubs.

After years of investment and encouragement, apparently once kids think about leaving school they’re lost from the sport.

Yet a team-racing regatta for U-18s this weekend is so heavily oversubscribed that qualification rounds for the 2018 event may be introduced.

Having started out just three years ago with eight teams, the Elmo Trophy, a competition for two-person dinghies, is dedicated to the memory of Graham Elmes, a passionate sailor and team-racer who died in May 2014.

While ten teams sailed last year, organisers at the host Royal St George Yacht Club in Dun Laoghaire were taken aback when 23 teams applied to line up for 2017 – but with capacity limited to 18, the entry was capped.

“Possibly next year we’ll have to look at qualification but to be honest I’d prefer to avoid that,” said organiser John Sheehy yesterday. “We’ll contact the universities and see if we can get more flights of boats; we could have 30 teams.”

The Optimist class will be well-represented including a new squad coming through from the Royal Irish YC.

Howth’s Ewan McMahon will have a squad there while the host club representation will include Kate Lyttle, a 420 national champion and Toby Fowler, a multiple race winner at Laser Radial championship level.

But Sheehy refutes the suggestion that it’s an elite sailing line-up.

“It’s all about being inclusive rather than exclusive. The great thing about having the best sailors there is that it brings on the other guys,” he reckons.

So, what is the big attraction?

“Social is a massive aspect. There are boys and girls, different age groups but swap out of boats so it’s not non-stop and they get to meet one another and have the craic in between races.”

Each team will get at least 10 races with over 100 planned for the series.

“At least if a team has a bad race, because it’s short and snappy you don’t have to dwell on it and can look forward to the next opportunity,” said Sheehy.

Unlike other types of sailing, team-racing is not ‘first past the post’ but the best combination of the three-boat team.

Everyone racing this weekend is aged 18 or under and teams must include two under-16year-olds and there is a 50:50 mix of male/female including two all-girl teams. All must be connected either with a club or a sailing class or association.

So, what would the man who the Elmo Trophy is named after make of it all?

His friend Sheehy is clear: “His big passion was team-racing and he set up the Irish association. He was a terrific coach and was great with kids… he’d love this.”