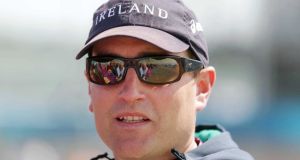 Irish Sailing Association High Performance director James O’Callaghan. “The sewage is visible and we have identified it as a significant health risk to our athletes.” Photograph: Morgan Treacy/Inpho


Irish officials and team members have identified the Brazilian waters, where the 2016 Olympic sailing event takes place as a “significant health risk” to athletes.

As a result Irish High Performance team officials have requested that funding be made available for a doctor to come with them in their next visit to the Rio de Janeiro venue to assess possible health concerns associated with the untreated sewage in the water.

Other junk ranging from plastic bags to floating televisions and pieces of plastic also represent a high performance risk during racing.

Irish sailing’s High Performance director, James O’Callaghan, who visited the site last summer, believes the health risk to be so significant that the doctor may require all team members on the water to be immunised against a variety of possible infections and illnesses.

“I was out in Rio last may. Annalise (Murphy) was out there in the summer and the guys in the 49er (Ryan Seaton, Matt McGovern and coach Ian Barker) were there before Christmas,” said ISA Performance Director, James O’Callaghan. “The sewage is visible and we have identified it as a significant health risk to our athletes.

“As a result we have asked that a doctor come out with us when travel back later this year for the first 10 days of August.

“We need to know if we need to take any special immunisation precautions. It is a concern for us. Even if the boats don’t capsize you are getting spray because of your speed across the water. If you have a cut we want to know what the chances are of infection or what precautions we might take because that could affect the athlete’s performance. It’s a genuine concern .”

Horse carcass
Sailors, who have been to Rio for training events, have reported entire trees floating in the bay, chunks of timber with nails protruding, swollen mattresses and countless plastic bags. One also said he saw a floating horse carcass in the 148 square mile bay ( which opens into the Atlantic just above Rio’s famed Copacabana beach) which also takes untreated waste.

According to Brazilian officials only 34 per cent of Rio’s sewage is treated with the rest spilling into the surrounding waters. Fifteen cities surround the sailing area of Guanabara Bay with eight million residents producing over one million litres of sewage per minute.

“The sailing authorities in Rio are pressing the authorities,” added O’Callaghan. “There is no denial that there is a problem with the water quality. In our training regatta before Christmas it was laughable in terms of performance.

“In a sense it is less of a problem than the health issue because in Beijing they had a similar problem with debris in the water and they raked the course every day and that seemed to pick up a lot of the material.”

Most illnesses arising from contact with sewage are caused by pathogens, the most common of which are bacteria, parasites, and viruses. They cause a wide variety of acute illnesses including diarrhoea, Hepatitis A, Tetanus and Leptospirosis, which can be lasting and serious.

1 Owen Doyle: Creeping professionalism of schools rugby a threat to the game
2 Coco Gauff pulls off biggest shock yet by beating Naomi Osaka
3 GAA officials and referees brace themselves as new rules kick in, and this time it's for real
4 Scotland’s Finn Russell missed training after Sunday drinking session
5 Rugby under threat; Niall Quinn steps into FAI breach
Real news has value SUBSCRIBE

Sam Bennett finishes second Down Under after route mistake 12:03
Ole Gunnar Solskjær insists he is up to the challenge at United 11:40
Rugby under threat; Niall Quinn steps into FAI breach 07:33
Serena Williams’ Australian Open hopes ended by Wang Qiang 08:15
Coco Gauff pulls off biggest shock yet by beating Naomi Osaka 06:41
Here is your handy guide to sport on television this week