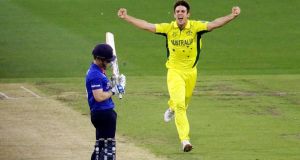 England captain Eoin Morgan was dismissed by Mitchell Marsh for yet another duck as Australia cruised to victory in their World Cup opener. (Photogaph: REUTERS/Hamish Blair)

England suffered a crushing 111-run defeat to Australia to begin their World Cup campaign in Melbourne.

England were made to pay for dropping centurion Aaron Finch in the first over of the game, and before he had scored, as a side with seven World Cup debutants were powerfully cast aside in front of 84,336 fans at the MCG.

Australia plundered 342 for nine — the highest score England had ever conceded at a World Cup — and the reply could only muster 231 in 41.5 overs.

To add to England’s woes, out-of-sorts skipper Eoin Morgan made his third successive duck against Australia and has now managed just two runs from his past five innings.

James Taylor offered some solace with an unbeaten 98 and Steven Finn claimed a hat-trick, from the final three balls of Australia’s innings, but even that was overshadowed by a Valentine’s Day to forget. All-rounder Mitchell Marsh did most of the damage with a career-best five for 33.

With an equally-difficult looking clash with the other tournament co-hosts New Zealand next up in Wellington, England will have plenty to ponder.

Most significantly Morgan’s men will head across the Tasman Sea with the knowledge that there is a sizeable gap — powerfully illustrated by Australia — between them and the tournament favourites.

The issue of their captain’s chronic lack of runs will also follow them while a sloppy display in the field allowed Finch to lay the foundation for the one-sided result as he hit 135 from 128 balls on his home ground.

Even after he departed Australia were able to take 105 runs from the final 10 overs.

Chris Woakes spilled the straightforward chance to offer Finch his reprieve, when he allowed a pull shot to burst through his hands at square-leg.

While England then did have Australia in some strife, at 70 for three after Stuart Broad struck with successive balls, Finch combined with stand-in captain George Bailey in a 146-run partnership that paved the way for a late explosion of hitting.

Glenn Maxwell crunched 66 from 40 balls and Australia found the rope 41 times before Finn became the first Englishman to take a World Cup hat-trick at the end.

Maxwell and Brad Haddin were both caught in the deep before Mitchell Johnson slapped the hat-trick ball to James Anderson, who was the first England player to claim the rare feat in ODIs at the Oval in 2003.

Finn therefore returned figures of five for 71 but his celebrations were understandably muted.

England’s reply never got off the ground as Moeen Ali was caught in the ring trying to heave Mitchell Starc.

Marsh, who would not have even been in Australia’s team if fellow all-rounder James Faulkner was fit, then took the next five wickets to effectively end the contest and leave the Mitchell England had feared most, Johnson, to cool his heels.

Ian Bell and Joe Root fell to successive balls before Morgan was out to a poor-looking shot for the second successive game. The left-hander reached for a short ball and when he got an edge Haddin dived away to hold it.

Steve Smith then pulled off a stunning diving catch close in to remove Jos Buttler and England were 92 for six.

Taylor added some respectability as he profited on a rare Finch error, dropping him in the deep, to bring up his fifty with a six off Marsh and added 92 with Woakes for the seventh wicket.

The end came in farcical circumstances when Taylor correctly reviewed an lbw decision, but after Anderson was caught short of his ground at the other end, he was unusually given out to leave his partner agonisingly short of his century.

After sending Australia in England should have removed both openers cheaply but after Woakes’ drop Ali failed to react quickly enough when David Warner drove aerially.

Broad checked Australia’s early progress with back-to-back wickets. He bowled Warner with a cross-seam delivery and then produced a peach of an outswinger to catch Shane Watson’s edge.

When Woakes then removed the in-form Smith, dragging onto his stumps, England were silencing the huge crowd only for the local boy Finch and Bailey to ease Australia into control.

Finch brought up his century from 102 balls, when he flicked Finn to the fine-leg rope, and he celebrated by leaping into the air and pumping his fist.

After watching his team flounder in the field, skipper Morgan produced a moment of brilliance in the field to finally remove Finch with a direct-hit run out.

Bailey then dragged Finn on, after a steady 55, but that only brought Maxwell to the crease and he shared quickfire half-century stands with Marsh and Haddin to reinforce Australia’s position.

Burnley hold on for a point to leave Arsenal stuck in 10th 14:43
Owen Doyle: Culture of ‘clip memory’ among modern referees not cutting it on the pitch 13:30
European Indoors: Sarah Lavin and Sean Tobin clock lifetime bests to advance 13:20
Lions tour will not take place in Australia this summer 11:39
England all in a spin once again as India seal the series 11:00