Pembroke aim to pick up the pace against Three Rock 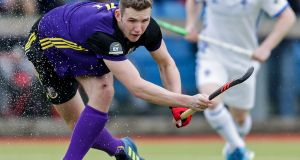 The bottom half meet the top half in the men’s EY Hockey League on Saturday with the likes of Pembroke, Glenanne and Corinthian hoping they can start bridging the five-point gap that has emerged.

Perhaps the most intriguing prospect is the battle between Pembroke and Three Rock Rovers with two wildly inconsistent sides meeting at Serpentine Avenue.

The hosts were surprisingly in ninth place over the winter break but bounced back last weekend to hammer Annadale 6-2 with Olympian Alan Sothern netting all of their goals.

With Harry Spain closing in on a return to their defence they will be bolstered significantly, but they are missing the services of his partner in crime Keith O’Hare which has stymied their playoff hopes to date.

“I think the league table rarely lies so we are where we are,” was coach Paudie Carley’s assessment of their slow start to the campaign. “But we expect the work done on improving coordination and link-ups in the break will serve us well and we don’t intend repeating our errors in the second half of the season.”

For fifth-placed Rovers – Champions Trophy winners for the past three years – it has been a transition season with a high turnover in players. Conor Quinn is back to vie for the goalkeeping duties with Shane O’Brien, but Ali Haughton and Jack McAllister look set to miss out this weekend.

Corinthian go to Belfield to face their fellow promoted side UCD at Belfield.

The reds have proven very difficult to beat but five draws from eight games means they are not further up the table, late concessions their Achilles heel.

High-flying UCD will be without Andrew Meates who has a ban following his red card last weekend against Glenanne.

The Glens, meanwhile, host an in-form Banbridge with four wins out of their five outings to their name, breaking into the top four for the first time this week.

The remaining two ties have, on paper, the potential to be cricket scores. Bottom side Annadale host Monkstown with the former having lost seven on the trot, conceding 48 times.

YMCA lost 8-0 last week against Bann and now face the league’s most ferocious forward line in Lisnagarvey who average over five a game.