Lagan Scullers’ head of the river cancelled due to weather concerns 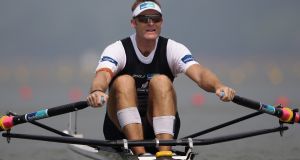 New Zealand have chosen Mahe Drysdale (41) as their single sculler for their World Cup campaign in this Olympic year. Photograph: Chung Sung-Jun/Getty Images

Rowing events are not having the best of luck at the moment. Lagan Scullers’ head of the river, scheduled for Saturday in Belfast, cancelled on Thursday after holding on in the hope that the predicted high winds would hold off until evening.

The opposite happened. The forecast of “severe weather” was brought forward to midday on Saturday, and the event was lost.

“We might have got the first race in, but clubs would have to travel for one of three [scheduled] races,” said Gordon Reid, the event secretary. The organisers did not think that this would be fair.

The entry was quite impressive, with Queen’s University supporting the event with quality and quantity. There was also the prospect of a race at under-18 level between Lucy McCoy and Molly Curry.

The Muckross head, scheduled for the National Rowing Centre in Cork last weekend, was cancelled in similar circumstances.

The agm of the Irish Amateur Rowing Union (Rowing Ireland) has been set for March 29th at the Garda Boat Club in Dublin. The closing date for nominations for secretary is March 8th.

On the international front, New Zealand have chosen Mahe Drysdale (41) as their single sculler for their World Cup campaign in this Olympic year. The reigning Olympic champion had been ousted from the boat by Robbie Manson, but Manson (31) will now compete in the double with Chris Harris.

Last year was disappointing for New Zealand, and they have not named a men’s sweep team beyond the coxless pair of Michael Brake and Tom Murray. The New Zealand Olympic team will be named on June 10th.

The Ireland squad faces trials later this month and in late March, after which the team for World Cups one and three will be announced.

Paul O’Donovan is studying medicine while nurturing serious Olympic ambitions in the lightweight double. It is a tough combination. However, he should be buoyed by the testament of Maaike Head.

The Dutch sculler combined the two and tells worldrowing.com that she always had the “long-term vision” of having something to switch to once her international rowing career had ended. She is now a surgeon – and, along with Ilse Paulis, the Olympic champion in the lightweight double.

Sanita Puspure, like O’Donovan a reigning world champion, has been named the Echo Women in Sport winner.

The National Rowing Centre, which is set for an improvement in on-the-water facilities, is getting a necessary upgrade of its wifi system.