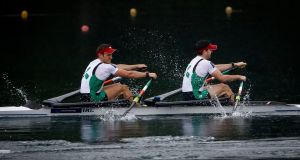 Ireland’s Gary and Paul O’Donovan had to settle for fourth in Belgrade. Photograph: Srdjan Stevanovic/Inpho

It was a bracing introduction to the new Olympic cycle for Paul and Gary O’Donovan. On a day of gold and silver for Ireland in other boats, the silver stars of Rio could only take fourth in the final of the lightweight double sculls at the World Cup Regatta in Belgrade.

The lightweight pair of Shane O’Driscoll and Mark O’Donovan took gold by outpacing British rivals with blistering speed over the final 250 metres, and Denise Walsh took her silver medal in the lightweight single with a similar strategy.

For Gary and Paul O’Donovan the slow start and killer finish has also been their race strategy - but this time they did not have it in the tank.

They had won their semi-final on Saturday easily, but the other semi had been much faster, and all the medallists came from that race. Britain’s Peter Chambers - a Coleraine man - and Will Fletcher raced well: they led early on, had a length at halfway and then survived despite charges by the Czech Republic, Poland and Ireland in a scrambling finish to win gold.

The real surprise was that Ireland were only the third fastest over the final 500 metres, extraordinary for the O’Donovan brothers. They would have taken bronze if they had covered that quarter - usually their hunting ground - faster than Poland, who finished third.

Dominic Casey, the Ireland coach, had urged caution before the regatta, and was not upset after the race. “Paul only finished his final exams last week. They’ve had a lot on: college - and life. Last year they were in the double all the way through. This year they haven’t really started.”

They go on with the team to their first warm-weather camp of the year, in Varese in Italy, before competing in the European Championships in the Czech Republic in three weeks’ time. The camps were a crucial part of building strength and speed last year.

If the British had the whip hand in this race, the roles were reversed in the lightweight pair. Shane O’Driscoll and Mark O’Donovan took on and beat Joel Cassells (another Coleraine man) and Sam Scrimgeour with such a strong sprint that the Britain crew faded to third behind Russia.

“There’s a bit of history between us and those guys,” O’Driscoll said. “They beat us to the bronze at the World Championships last year. I mean, fair dues to them. But today was promising. We’re keeping our feet on the ground looking towards the Europeans.”

Walsh was also targeting European glory after coming through the field to finish second behind Patricia Merz of Switzerland.

Was this her best result ever? “Best so far!” she said.

Sanita Puspure put in a hardworking performance in the final of the women’s single sculls but once the race developed she never broke out of the fifth place in which she would finish. Jeanine Gmelin of Switzerland left the field behind from halfway and won from Vicky Thornley of Britain, a silver medallist in the double in Rio, and Magdalena Lobnig of Austria.

It was a tough race in an Olympic discipline. Even this early, those with their eyes on Tokyo are staking their claims.