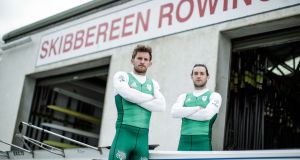 “We thought, ‘God Almighty, we went away there for one rowing session, now the whole thing is gone’,” says Gary, recalling the moment he heard the Olympics were being postponed into 2021.

“It doesn’t feel too long, but sure as you get older time passes faster anyway,” Paul responds, thinking back to when they won their silver medal in Rio in 2016.

It’s always been hard to interview the O’Donovan brothers without being gently lifted and illuminated by their presence, and nothing about the Zoom footage straight from their house in Skibbereen in west Cork changes that.

“Sure this morning I went for a bit of a wander, looking at the grass and the trees, checking out the views . . . anything could take over my day I can tell you,” says Gary, on how he’s been filling part of his time in lockdown.

“Being in the boat, you do get a better feel for the other person, but otherwise it’s just as good,” says Paul, on how they’re still training every bit as hard towards Tokyo 2021.

There’s a lot of sympathy for different athletes and sports out there at the moment, although the O’Donovan brothers certainly aren’t looking for any of it. They’re both in lockdown together in a rented cottage near their home at Lisheen in Skibbereen, and while that may be testing some of the sibling rivalry, they have everything they need to continue their Olympic aspirations.

“We’ve realised too exactly how we live, not interacting with anyone anyway, is nothing really different,” says Gary. “Of course it’s tough for families, or people working in offices, but we wouldn’t be interacting with many people anyway.”

They had been on an Irish Rowing training camp in Seville when the first Covid-19 restrictions were implemented in early March. They immediately returned home, spent two weeks in quarantine, but since then it’s been more or less training as usual.

“I’ve no idea when we’ll be back on the water, to be honest,” says Paul. “During the week, we’d be on the rowing machines a lot anyway, so we’d be quite used to that. It all depends now on when restrictions are lifted.”

Of all Olympic sports, and certainly team contact sports, indoor rowing during a global pandemic is essentially as good as it gets anyway.

“We’ve got the Concept 2 rowing machine, probably the best piece of exercise equipment on the planet,” says Gary. “Actually they reckon it is the best piece of exercise equipment for training anyway. We use it all winter long, and it’s sometimes better than being of the water for more quantitative training, you can get a lot more information on the screen in terms of distance and wattage and that.

“We’ve rented a small cottage, just down the road from home, so we could be exclusively on our own, away from family and friends. The rowing machines can be moved around easy enough, and we’ve just been on our own the last month so.”

Still behind this playful masks are two deadly serious athletes, and perhaps now more than ever: last year, Paul (27) lost his place in the lightweight double sculls to Fintan McCarthy, who partnered younger brother Gary (26) to win the gold medal at the 2019 World Rowing Championships in Linz, Austria.

McCarthy wasn’t certain of partnering Paul again in 2020, his twin brother Jake McCarthy also in the mix, as well as Shane O’Driscoll. Gary will stop at nothing to get his place back – all of which should make for a faster, stronger boat whenever it does get back on the water.

“Internally, for me, it doesn’t make a huge difference, having Fintan there or not,” says Gary. “My plan, my goal, is to win the Olympics, and that means doing all the training that I can, that I think is necessary, to make me as fast as possible. And whether Fintan is there, of Jake, or Shane, and there’s five lightweight guys in Ireland who are all really, really good. But I still have to do the training I have to do to win the Olympics. Ultimately I still have to do all that I can.

“And because we were in some good condition, after Seville, the motivation is to maintain that, not lose any it. We were training flat out in February, and I got a PB just before the lockdown. So you don’t want to lose that fitness.”

Even without an Olympics in 2020 there are other targets too: “The Olympics are still set for next year, that’s one,” says Paul. “They’re talking as well as about rescheduling the European Championships for October, possibly. We don’t mind training anyway on a daily basis.”

That sibling rivalry has sometimes been tested in the boat, especially if there’s any loss of that “pull like dogs” tactic like in Rio, but the last month has brought them closer in other ways too. Paul had deferred his graduate-entry medicine studies at UCC at Christmas, and has now resumed online classes, and the lockdown has allowed them spend even more time together.

“I suppose you could call me a full-time athlete these days,” says Gary.

Paul agrees there is no let-up in training: “We were meant to be racing next month, in Europe, so the intensity has changed a little, it’s more endurance-based stuff. We just try to break it down, keep it simple, and we’re lucky that it’s not a team sport, or swimming say. We can still do all the training with the equipment we have here.”

If anything the lockdown might bring them both closer to their prime in 2021: “I think our knowledge of the sport has accumulated a lot since Rio,” says Paul. “Back in 2015, we were still new to international rowing. Rio was our first year winning a senior international medal. We’ve a lot more confidence now, back then it was a bit more naivety, and ignorance, that got us successful. It’s more calculated now.”

And a possible advantage for Tokyo 2021? “Another year of rowing will definitely help,” says Gary, “but everyone else will have that too, they’re all thinking the same thing. But taking the optimistic look, this is an extra year to get fitter and stronger.”

And there’s a lesson in there for us all.

The O’Donovan brothers were talking in their roles as FBD brand ambassadors, supporting Team Ireland into the 2021 Tokyo Olympics.