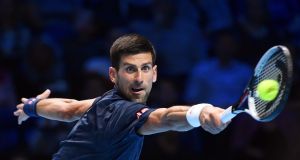 Novak Djokovic knows his resilience under the cosh has wilted a little. Photograph: Andy Rain/EPA

To understand what Novak Djokovic is experiencing for the first time since 23 June 2014 – the last time he wasn’t number one in the world – it helps to stand back from the heat that has been generated around him in London this week.

The pressure on him now, as he seeks to win his fifth ATP World Tour Finals in a row and reclaim the rankings crown he lost to Andy Murray in Paris 10 days ago, is unlike everything else he normally goes through. Djokovic knows when he steps on court that he wins eight times out of 10, whoever he is playing. That certainty has been dented.

Against Murray he is 34-10 win-loss over the course of their near-parallel careers. They cannot meet for a 35th time until the final on Sunday at the earliest, and that would provide as rousing a finish to the season as we have seen in a long time. Murray does not want to be a two-week wonder at the head of the rankings.

Against the other three players in his group at this tournament, Djokovic is 24-0 after surviving an edgy first set to beat the nothing-to-lose young Austrian Dominic Thiem on his London debut on Sunday afternoon.

On Tuesday night, Djokovic looks for victory number 25 against the trio ranged against him, this time taking on Milos Raonic, whose torn right quad forced his retirement in Paris but who looked near to his powerful best beating Gaël Monfils in straight sets on Sunday night. However, Djokovic’s hold over him is total: 7-0, the most recent win coming in two quick sets on the Madrid clay in the summer.

Yet it has invariably been in defeat that Djokovic has spoken most movingly and with the sharpest insight about himself and his sport. After a loss to Marin Cilic in the last Masters 1000 tournament of the year handed Murray his ranking supremacy after a reign of 123 weeks [when the Scot then was prematurely crowned after Raonic pulled out of their semi-final], he was considerably more measured than when he snapped in victory over Thiem.

He responded with undisguised impatience on Sunday when asked if hitting the ball into the crowd at the end of the first set was part of a worrying pattern of behaviour and whether or not he was comfortable with his “mindset”, which he earlier in the year admitted had been disturbed by events on and off the court. It was a reasonable question to ask a player with the highest profile in his sport.

“You guys are unbelievable,” Djokovic said, before retreating to what probably was the relative comfort of more amenable questions from the Serbian media. They have been loyal allies and remain defensive about any criticism of their country’s best and most famous athlete, as a cursory glance at social media will reveal.

Yet Djokovic’s Parisian take on life and tennis could not have been more candid. “I’m aware that I’m not the only player in the world who wants to win when he gets out on the court,” he said in defeat 10 days ago. “I’m going to keep playing at this level as long as I feel like that’s the right thing for me. I have to get to that state of mind where I’m able to perform as well as I want to, match after match. I was not able to find that level for the last couple of months.”

He added: “A lot of things are coming out, a lot of things, a lot of emotions went through my mind and body in the last two years. It took a lot out of me.”

Yet it is when Djokovic is wounded, physically or spiritually, that he has found the iron will of a champion. In the ATP’s Under Pressure ratings, he leads Andy Murray 271.1 to 257.5 over the past 52 weeks – although his stats will have taken a light hit since he lost to Sam Querrey in the third round at Wimbledon.

In the subcategories of the rankings, Djokovic has converted 42.4 per cent of break points (Murray 45.1), saved 67.9 (65.8), won 73.9 per cent of tie breaks (70.4) and, most pertinently, 87.5 per cent of deciding sets, to Murray’s 76.2 per cent. All of those numbers are impressive for both players, and they lead Kei Nishikori, Juan Martín del Potro, Thiem, Raonic, Lucas Pouille, Richard Gasquet, Viktor Troicki and Florian Mayer in the aggregated rankings.

None of which will invade Djokovic’s thinking when he steps out against Raonic. He knows his resilience under the cosh has wilted a little. He does not need reminding that the latter part of the season has been his most uncomfortable spell in a long while.

Although he says his troubles began at Wimbledon, he won the Rogers Cup in Toronto without dropping a set.

After that, it got seriously tough: Del Potro put him out of the Rio Olympics in the first round, inducing a tearful exit; Stan Wawrinka beat him at the end of a bizarre US Open, where a walkover and two retirements helped him into the final; world number 19 Roberto Bautista Agut beat him for the loss of eight games in the quarter-finals of the Shanghai Masters; and Cilic, who had not beaten him in 14 attempts, completed the misery for him in Paris.

The reality of battle consumes Djokovic. It delivers him the inner animal that resides in all great champions. If he is fit, he should beat Raonic, although it might take three sets. After that, he has the unique challenge of the unorthodox Monfils, who briefly confused him before losing in four crazy sets in the semi-finals at Flushing Meadows. If Djokovic gets to the weekend, as he should, the likelihood is we will see the player who for two years has been the best in the world.