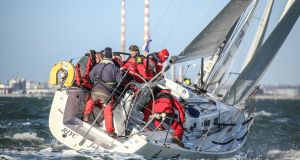 Triple ICRA Class one champion skipper John Maybury at the wheel of his J109 yacht Joker II on Dublin Bay. The Royal Irish Yacht Club helmsman is among 28 in the running for the Irish Sailor of the Year award tonight at the RDS in Dublin. Photo: David O’Brien

Offshore sailing exploits are expected to feature strongly on Friday night in Dublin at the presentation of the Volvo Irish Sailing Awards where 28 sailors and pairings are shortlisted for tonight’s top prize.

In a bumper year of achievement for sailors across many disciplines, a gathering of over 400 at the RDS main hall in Ballsbridge from 6.30pm will salute a wide range of exploits but none more so, perhaps than in Atlantic waters where a dozen offshore feats in 2017 include a top ten Fastnet Race result, a RORC series points winner plus a Transatlantic Race win.

The Royal Irish’s Michael Boyd win in the RORC’s points championship was undoubtedly a season highlight as was Conor Fogerty’s win in the OSTAR and TWOSTAR fleets in the North Atlantic in early June, where the solo sailor from Howth Yacht Club survived a mid-ocean storm. And in another fine offshore best, Tom Dolan from Co Meath, narrowly missed the podium in the Mini Transat.

For the ceremony, and in a nod to improving safety in sailing, Irish Sailing organisers have flown in dinghy sailors Santiago Alegre from Spain and Simon Hoffman from Australia to thank them for saving the life of Royal Cork’s Johnny Durcan, one of Ireland’s leading high performance sailors, who got into difficulty at the 29er World Championships in California last summer.

The pair will be presented with a President’s Award by Irish Sailing chief Jack Roy.

Since it began 22 years ago, the awards scheme has recognised over 340 monthly award winners. The first sailor of the year was Laser dinghy exponent Mark Lyttle, a race winner at the 1996 Atlanta Olympics.

Meanwhile, double Olympian Matt McGovern (34) from Belfast Lough has quit plans for Tokyo 2020 and announced his retirement. Teamed with Carrickfergus helmsman Ryan Seaton for London and Rio, the pair became Ireland’s most successful skiff duo in the Olympic 49er dinghy. The Northern Ireland pair split after the 2016 regatta and both announced separate 49er campaigns for Tokyo. In January last year, McGovern launched a bid with 2013 Laser youth champion Robbie Gilmore and the pair spent 2017 on the international circuit.