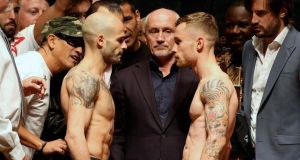 Kiko Martinez and Carl Frampton stare each other down during today’s weigh-in ahead of Saturday’s IBF super-bantamweight title fight. Photograph: Matt Mackey/Inpho 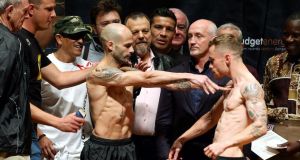 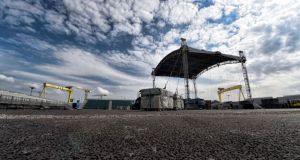 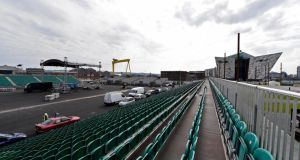 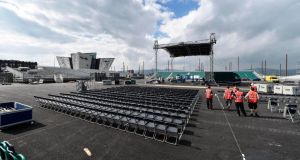 Belfast has always seemed to possess a grim sense of humour. That Carl Frampton’s second meeting with Kiko Martinez takes place on the slipway of the Titanic has drawn disaster jokes all week.

The most celebrated ship in history and Belfast’s biggest ever fight come together in the Titanic Quarter, where the super bantamweight from Tiger’s Bay believes the 16,000 crowd will witness the launch of the province’s first World Champion since Wayne McCullough in 1996.

He’s in no mood to play the Leonardo DiCaprio blockbuster role that ended in a North Atlantic watery grave.

Frampton (18-0) has already beaten the Spaniard (31-4) when they met in February 2013 for the European title. Surviving the trademark Martinez heavy hitting - which ended the reign of Dublin’s Bernard Dunne seven years ago - before stopping him in the ninth round gives Frampton both the confidence and knowledge to do the same again.

In the interim Martinez recovered his career to win the IBF Super Bantamweight world title, the belt on the line for this meeting. Frampton concedes that this time there’s more at stake and the expectation of the city weighs more heavily than it did before. It may also be more daunting.

“I don’t know. Maybe the first time because I didn’t know what to expect,” he says. “I know what to expect now. I think the more daunting task now is that it’s for a world title, it’s a bigger fight and a bigger venue. That’s pretty daunting. But Kiko as my opponent, I don’t really fear him.

“I think I’m a much better fighter now,” he adds. “I needed to fight a Kiko for the European title. It was a real good check for me and confirmed to me that I can go right to the top, especially when he went on to win a world title, because it was a tough fight.

“I had to work hard in that fight. It seems like it has been a while now. I’ve only had two fights in between but I know that I’m a much better fighter now.”

When former world featherweight champion Barry McGuigan, who will be in Frampton’s corner with his son Shane, won the WBA featherweight title from Puerto Rican great Eusebio Pedroza in 1985, an estimated 20 million people were watching on the BBC.

Boxing is no longer that big a draw but the rights have been sold to the United States, South America, China, Japan and the Middle East (Irish viewers can watch the fight on satellite channel BoxNation). Frampton’s is a broad church but at home his brand of religious tolerance has also sold itself across communities. Neither that nor the full house will faze the heavy fisted Martinez.

Since winning the IBF World Super-Bantamweight Championship in New Jersey last summer, the 29-year-old has defended once on home soil against Jeffrey Mathubela and also travelled to Japan to secure a seventh round TKO against Hozumi Hasegawa.

“He’s always boxed away from home, it doesn’t really matter, but he’s boxing me now in Belfast and I believe I’m better than Jeffrey Mathebula and Hasegawa,” says the 27-year-old Frampton.

“Although it looks good on paper, and they were good wins to give him his due, it doesn’t matter because he hasn’t beaten me in Belfast.”

1 Owen Doyle: Creeping professionalism of schools rugby a threat to the game
2 Champions Cup: Leinster will meet Saracens on Saturday evening
3 Ole Gunnar Solskjær insists he is up to the challenge at United
4 GAA officials and referees brace themselves as new rules kick in, and this time it's for real
5 Scotland’s Finn Russell missed training after Sunday drinking session
Real news has value SUBSCRIBE

Roger Federer edges John Millman in five-set Melbourne thriller 15:02
Champions Cup: Leinster will meet Saracens on Saturday evening 13:18
Bill Beaumont seeks re-election as World Rugby chairman 12:07
Sam Bennett finishes second Down Under after route mistake 12:03
Ole Gunnar Solskjær insists he is up to the challenge at United 11:40
Here is your handy guide to sport on television this week